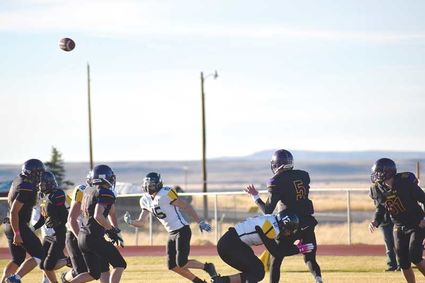 The Saratoga Panthers dominate the Wright Panthers at the homecoming game on Friday night to the delight of fans.

The Saratoga Panthers gave their homecoming audience something to cheer about as they walloped the Wright Panther football team on Friday evening.

There was some disappointment however that the game ball couldn't be delivered by Flight for Life due to the winds that were gusting to over 50 mph.

Saratoga started out by taking control of the game in the 1st quarter and never relinquished their hold against the Wright Panthers. The Saratoga Panthers scored with just a few minutes off the clock. When the Wright Panthers got the ball, they fumbled. Teegan Love hit Noah Rimmer on the 2 yard line. The next play had Rimmer run in for a touchdown just before the 2nd quarter started and went up 12-0. Geoffrey Johnson made the reception to grab the two points, making it 14-0.

With 6:09 left in the 2nd quarter, Rimmer made a fumble recovery at Wright's 13 yard line. After getting a penalty and losing yards, the Saratoga Panthers waited just one series before Love ran the ball in for a 49 yard touchdown.

The Saratoga Panthers were not done scoring before the half was over. Love connected to Heston Fisher for another touchdown. The conversion was good and Saratoga went into the half 28-0.

At halftime the fans were introduced to the Saratoga High School royal court.

The 2nd half had the Wright Panthers pound their way down the field to finally get on the board. They didn't score any extra points and the score was 28-6 with six minutes left in the 3rd quarter.

Fisher caught another ball from Love to score before the quarter was over. The score was 34-6 as the clock wound down.

The 4th quarter had Gavin Bartlett score a touchdown from a pass from Love and Bartlett also scored the conversion putting the Saratoga Panthers up 42-6.

Wright scored with 2:30 left in the game. They didn't get the conversion and the score was 42-12.

That was how the game ended.

Logan Wright, head coack of the Saratoga Panthers couldn't have been happier.

"I am super proud of this team," Wright said. "These amazing seniors did a tremendous job. It was not too long ago our football team had eight kids, with six being from Saratoga. We had losses of 70, 60, 50 all the way down, and for these seniors to make the playoffs this year."

Wright said the beginning of the season didn't go well for the Panthers, but he sees the team hitting its stride at the right time.

The coach was glowing in praise for Rimmer, Zack Standard, Bartlett and Love.

The next game finds the Panthers going to Lusk to face the Niobrara County Tigers at 5 p.m. on Friday. The Tigers are 5-2 overall and 4-1 in the conference.

With this win Saratoga is 3-3 overall and 2-3 in conference play.