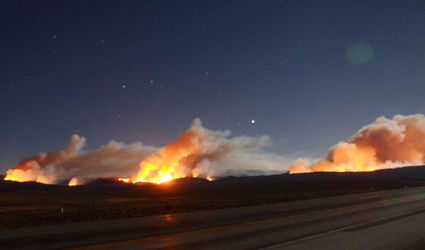 Several plumes of smoke can be seen Tuesday night from Skyline Road as the Mullen Fire continues to burn.

Just two weeks since it began west of the Savage Run Wilderness, the Mullen Fire is now nearly 100,000 acres in size following massive growth Tuesday night. Despite cooler weather on Sunday and Monday, the return to warmer weather aided the blaze in its dramatic increase.

Since starting on September 17, the Mullen Fire has burned through most of the Savage Run Wilderness and Platte River Wilderness while spreading from Carbon County over to Albany County in Wyoming and moving towards Jackson and Larimer counties in Colorado. As of the afternoon of September 30, the following Wyoming communities were under mandatory evacuation:

Areas near Sheep Mountain and Lake Hattie and north of Wyoming Highway 230 along with Centennial were still under pre-evacuation notice. In Jackson County, Colorado pre-evacuation notices had been issued for the area of three-way and north on Colorado Highway 125 and Colorado Highway 127. In Larimer County, Colorado, a voluntary evacuation order for the areas of Roach and Hohnholz had been issued.

Additionally, the Albany County Sheriff's Office announced that there had been 38 property owners who had lost property to the Mullen Fire and included 29 dwellings and 31 outbuildings.

Between Tuesday and Wednesday, the Mullen Fire grew from 82,649 acres to 96,757 acres in size making it the second largest period of growth for the fire since it began. In addition to the growth of the fire, the number of personnel on the fire increased as well and was at 887 as of Wednesday with more aid incoming.

A Story Map of the Mullen Fire can be found at https://nifc.maps.arcgis.com/apps/MapSeries/index.html?appid=0ce5e2c949fb4f89909c50fb5692f52f. Updated information is still available at https://inciweb.nwcg.gov/incident/7208/.

As of 3:24 p.m. on September 30, Wyoming Highway 230 from Riverside to the Colorado State Line was closed. An estimated opening time was unknown as of 3:50 p.m. Based on measurements on the GIS website for the Mullen Fire, part of the fire's boundary was within a half-mile of Wyoming Highway 230 near Big Creek Road.

At approximately the same time that Wyoming Department of Transportation closed Wyoming Highway 230 from Riverside to the Colorado State Line, the Jackson County Sheriff's Office announced a mandatory evacuation for residents north of three-way effective immediately.

By Wednesday evening, the Mullen Fire had grown nearly another 10,000 acres in size to 107,747 and the number of personnel working on the fire had increased to 934. The fire, in fact, had moved so fast in its growth that the mapmakers could not keep up. By Thursday morning, that number had increased, again, to 117,240 making for over 20,000 acres of growth in a 24 hour period. 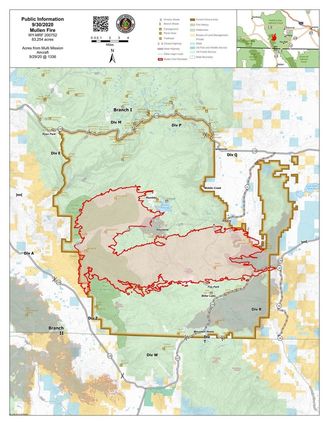 The most recent fire map from Inciweb shows the increased growth of the Mullen Fire as of September 30.

According to the morning operations update for the Mullen Fire, firefighters conducted burnout operations in areas deemed safe to do so in an attempt to remove fuels along roads, fire lines and natural features. West of Albany, control lines were implemented south of Forest Roads 500, 513 and 542 to improve the defense of Albany, Keystone and areas east of Rob Roy Reservoir. Additionally, fuels were burnt out along the Wyoming and Colorado Border on the west side of Wyoming Highway 230 and Colorado Highway 127 near Mountain Home and WyoColo.

As of Friday morning, the Mullen Fire had seen another large push. Infrared mapping performed at midnight placed the fire at 127,503 acres and accounting for another 10,000 acres in growth. Overnight, firefighters had conducted successful burnout operations along the north side of two Colorado highways; Highway 127 and Highway 125 to block the fire's advance. As the fire continued to push down into Colorado, the Jackson County Sheriff's Office called for a mandatory evacuation in the area of Highway 127.

The Saratoga Sun will continue to work to update this story.