Despite score of 18-34, Saratoga keeps Hornets abuzz on the field 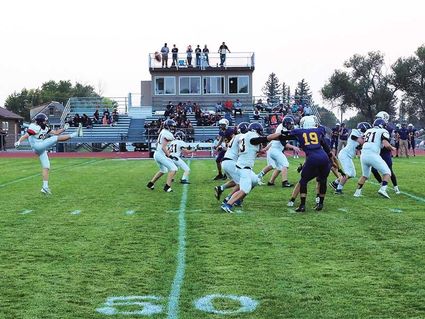 The Panthers and the Hornets scuffle on the gridiron as Saratoga kicks off on Friday afternoon.

The Saratoga High School football team went to Pine Bluffs to try and get their first win of the young season. A valiant effort was put forth said head coach Logan Wright but, in the end, the Panther team came up on the losing side.

"Pine Bluffs got two touchdowns back-to-back in the 1st quarter but, after that our defense kept them scoreless the rest of the 2nd quarter," Wright said. "We scored in the 2nd quarter and we were down to Pine Bluff's five yard just before the half was over."

Wright said that the Hornet's defense responded well to the Panthers' attempt to score just before half-...