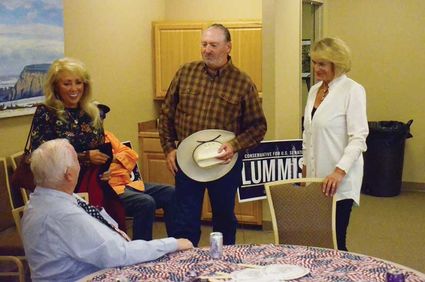 Teense Wilford, left, greets guests to the Cynthia Lummis meet and greet at the Platte Valley Community Center on September 19.

Senate candidate Cynthia Lummis made a stop in Saratoga on September 19 as she gears up for the general election. Lummis, who served as Wyoming's sole representative from 2009 to 2017, was hosted at the Platte Valley Community Center (PVCC) by Teense and Sandy Willford.

Prior to running for the U.S. House of Representatives, Lummis had served in the Wyoming Legislature alongside Teense Willford. Despite a packed agenda for the day, Lummis paid a visit to the Saratoga Sun where she answered questions on both state and national issues ranging from Wyoming's deficit to the passing of Associate...