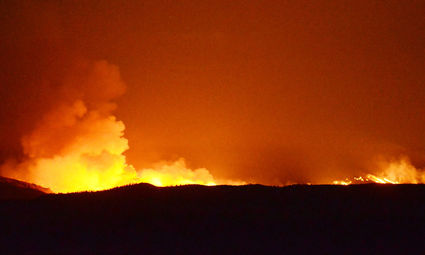 The glow of the Mullen Fire is amplified by smoke as seen from Skyline, southeast of Encampment, on Thursday evening.

The Mullen Fire, which began on September 17 and quickly grew over the weekend, has now increased in size to 14,653 acres according to information on Inciweb.

On the morning of September 22, at approximately 6 a.m., a Type II Incident Team-the Rocky Mountain Area Incident Management Blue Team-took over management of the Mullen Fire. A virtual open house was held at 5 p.m. that same day. A Type II team is a federally and/or state-certified team that often handles smaller scale national or state events and has less training than a Type I team.

Currently, an estimated 185 personnel are working on the Mullen Fire and it is two percent contained. An estimated date of October 30 has been given for containment of the Mullen Fire, thought that may change depending upon weather and fuels.

The cause of the fire is still under investigation, though the United States Forest Service (USFS) believes it may be human caused. Those with first hand information on activity occurring in the eastern area of the Savage Run Wilderness, specifically in the South Mullen Creek drainage, are encouraged to call the Medicine Bow National Forest - Laramie Ranger District anonymous tip line at 307-745-2392. When calling the tip line, select option five ("to report any other information").

On Wednesday evening, the Mullen Fire became more active due to high winds, warmer temperatures and low humidity. Additionally, the fire had seen growth on the southeast side of the fire into the Platte River Wilderness area. According to the update on Inciweb, this growth and the direction of it was expected and both helicopters and fixed wing aircraft were working on slowing the progression of the fire.

In a video uploaded to the Mullen Fire Information Facebook page earlier in the afternoon, the Rocky Mountain Area Incident Management Blue Team stated that water was being drawn from Lake Hattie and, potentially, Rob Roy Reservoir to help in fighting the fire. Due to the use of Lake Hattie, the Wyoming Game and Fish Department (WGFD) had closed it to all watercraft.

As of Thursday morning, the Mullen Fire had grown to 17,763 acres and was continuing to grow in the Platte River Wilderness area. Westerly winds brought smoke from the fire into the Platte Valley and leaving a haze throughout Saratoga and hiding Elk Mountain and the Snowy Range from view. Personnel working on the fire had increased from 185 to 290 and focus was placed on protection of the Rambler subdivision, Keystone and A-Bar-A.

By Thursday evening, the fire had grown to 19,526 acres. Fingers of the fire had crossed 500 road towards the northeast and the fire was entering the Keystone Fire burn scar and impacting Forest Road 512. For the safety of the firefighters, Carbon Power and Light turned off electricity to the evacuated areas west of Albany. This included Keystone, Lake Creek and the Rob Roy Reservoir Area.

As the fire continues to burn, the Department of Environmental Quality forecasted that the air quality index (AQI) over the weekend would drop, with reports on Thursday afternoon putting the number at 131. By Friday morning, that forecast was placed at 118. The low air quality would certainly be felt by those with health problems while healthy individuals would also likely struggle with breathing as well and a sore throat following prolonged exposure.

Late Friday morning, the Saratoga Sun spoke with John Peterson, public information officer for the Rocky Mountain Area Incident Management Blue Team, who stated that the fire had grown to 25,250 acres overnight. Peterson added that the high winds and low humidity would lead to more increased growth over the weekend.

Peterson also stated that, due to the fire load and increasing growth of the fire, hand crews were not on the fire line but rather focused on defensive groundwork in areas such as Rambler and Keystone. Ground had been cleared and sprinklers were running on structures in those areas in attempts to protect them from the forward moving fire.

Peterson added that what had been helpful for those fighting the fire was the pincer-like formation the fire had taken, allowing the divisions to focus on specific points. Additionally, the burn scar of the Keystone Fire in 2017 and the limited fuels around Rambler were stalling the fires from attacking those areas.

Over the course of Friday afternoon, the high winds and warm temperatures aided the fire in a dramatic increase as it grew over 10,000 acres in less than a day. Mapping of the fire by the night of September 25 put the fire at 35,810 acres. That increased led to a mandatory evacuation of the following areas: Foxborough, Fox Park to Albany South, Woods Landing and Fox Creek Road.

Along with the increase in the size of the fire, the number of personnel on the fire had increased as well, from 290 to 426. On the Saratoga side, the glow of the fire could be seen from Highway 130. A new closure order was also released that extended from Highway 130 over Snowy Range down to the Colorado border and from the western borders of the national forest in Carbon County to the eastern borders in Albany County.

On Saturday afternoon, Peterson informed the Sun that the Mullen Fire had increased to 69,138 acres. This was slightly lower than an estimate posted by Governor Mark Gordon's social media accounts earlier in the day. Wyoming Highway 230 from Riverside to the Colorado border and from the Colorado border to Woods Landing was closed to traffic on Saturday afternoon. Additionally, mandatory evacuations were issued for everything along Wyoming Highway 10, which included Jelm along with Woods Landing, and everything to the Colorado State Line.

The closure from Riverside to the Colorado border was lifted approximately 4:30 p.m.

In a Saturday evening Q&A that was livestreamed on the Mullen Fire Information Facebook page, Chris Zoller, Operations Section Chief for the Rocky Mountain Area Incident Management Blue Team, stated "All bets are off with this fire." With the fire having seen over 30,000 acres of growth in just one day due to warm weather and 70 mile per hour winds, Zoller made clear that while he believed the city of Laramie was safe it was likely the fire would leave the mountainous areas and move into the plains and sagebrush.

"You put 70 miles an hour behind any kind of fire and it's going to eat anything it can and continue to move across that landscape," said Zoller.

Additionally, during the livestream, Zoller informed viewers that he was unable to provide any updates on the status of communities that had been evacuated such as Rambler, Keystone, Albany and others.

"With the two days' growth on this fire, our resources are extremely thin. We have folks out there ahead of the fire trying to get evacuations and do structure protection and they've been working really hard and they're trying to get back to areas where they need to follow up with structure protection and try to juggle that balance while we're calling out more evacuations," Zoller said. "We just don't have the manpower to go in and do that kind of evaluation yet. We're still struggling to stay ahead of this fire and keep things safe and keep the public evacuated ahead of this fire."

A piece of good news from the livestream was that Division Alpha had been able to establish an anchor point on the west end of the fire near the A-Bar-A Guest Ranch and the Platte River Wilderness. 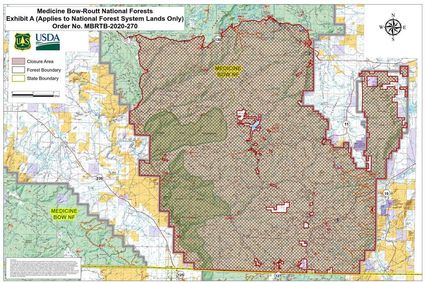 The newest closure map shows the massive closure that envelopes the southern-most portion of the Medicine Bow-Routt National Forest and has extended to Sheep Mountain.

Russ Bacon, forest supervisor for the Medicine Bow-Routt National Forest and Thunder Basin National Grasslands, was also on the livestream and informed viewers that they should be prepared for the Mullen Fire to be around for a while. Bacon recalled the 2018 Ryan Fire and the 2016 Beaver Creek Fire. Bacon reminded viewers that the Ryan Fire, which had started in the Routt National Forest in Colorado and had burned up into Wyoming, had burned until the middle of October before it was contained.

Sunday morning, in a morning debrief posted to the Mullen Fire Information Facebook page, Zoller stated that the fire was not expected to see much growth due to cooler temperatures and increased humidity. The section chief added that current projections of the fire had it moving south towards the Colorado border.

Overnight, the Mullen Fire had crossed over onto Sheep Mountain and had also crossed Wyoming Highway 230 near Woods Landing into one of the few areas left untouched by the Badger Fire. Zoller also stated that there had been fire growth with the anchor point on the west end of the fire as it crossed the Platte River in the Platte River Wilderness and was near the Pickaroon Campground.

The Saratoga Sun will continue to work to provide information as it becomes available.