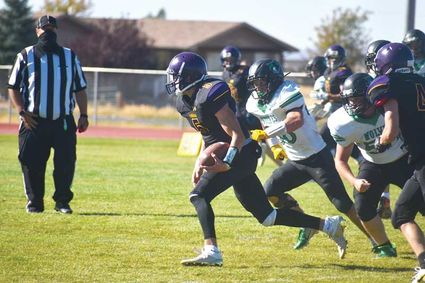 Teegan Love runs with ball towards the Moorcroft goal at Saturday's game in Saratoga.

The Saratoga Panthers hosted the Moorcroft Wolves at 2 p.m. this Saturday in a conference game.

In the 1st quarter, the Panthers were the first to score. The Wolves got down the field on several occasions but Saratoga's defense held them scoreless at every attempt.

The 2nd quarter saw Moorcroft come knocking on the one yard line of Saratoga only to have Noah Rimmer stop the Wolves dead in their tracks.

Another big defensive play was Teegan Love swatting down a pass that stopped a drive by the Wolves with a little over three minutes left in the quarter. The Panthers were getting down the fi...