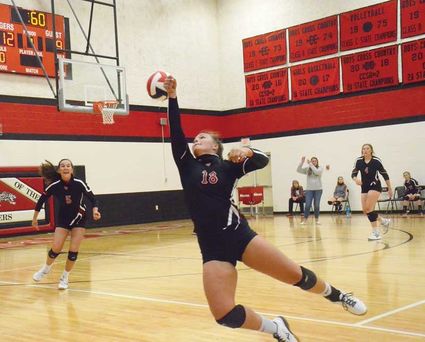 Encampment's Lizzi James (18) sends the ball back to Allison Bromley during Saturday's game against Baggs.

The Encampment Lady Tigers ventured into the Panther Den and hosted their own game this weekend, both against conference rivals, only to go 0-2. On Friday, Encampment traveled northward to face the Saratoga Lady Panthers (3-3, 1-0). The following day, the Lady Tigers hosted the Little Snake River Valley (LSRV) Lady Ratters (4-2, 1-1) in Tiger Nation.

Despite their best attempts, Encampment would go 0-3 in both games.

When the Valley and conference rivals faced off in the Panther Den, the Lady Tigers had what appeared to be a slow start to their match as they fell in the first set 12-25. In the following two sets, Encampment worked to bring the score close, going 20-25 in sets two and three. At several points throughout the sets, the Lady Tigers would find themselves leading by a few points. Saratoga, however, would take advantage of mistakes to surge ahead.

"I think that night, nerves kind of got the best of us coming out and it took us a good set just to get our nerves calmed," said Robin Brown, head coach of the Lady Tigers. "I'm not sure if that was just our first conference match that to them or if they're just putting some pressure on themselves but nerves were kind of an issue for us for Saratoga."

Coming off of their first conference loss, the Lady Tigers didn't have much time to rest as they hosted LSRV the very next day. As Tiger Nation played host to the Lady Rattlers, Encampment would end up with another conference loss added to their weekend. Despite that, however, Brown saw highlights in her team.

"I felt defensively, and even offensively, we played well. They were talking to each other quite a bit more. There's still work to be done there but, for the most part, they were playing well. They were playing a lot more relaxed. Tonight, it was our serving that killed us," Brown said. "We'd get a point and we'd get our momentum and then we'd miss a serve and it would put us back to square one. That's something that we're going to work on and improve upon."

Following this weekend, Encampment is 2-3 for the season and 0-2 for conference play.

The Lady Tigers will have another chance at a conference win as they hit the road to be hosted by the Farson-Eden Lady Pronghorns (4-1, 1-0) at 11 a.m. on Friday.