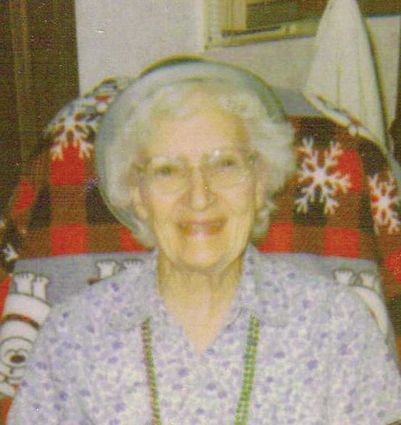 She was born September 6, 1924 at Haviland, KS the daughter of Willie C Ray and Lulanell Elizabeth Dealey Ray. Living on a farm outside of Tribune, Retha attended the country school of "Cactus". One season her grade school competed against another country school, Mt Olive, and two town schools, Tribune and Horace in a competition which we would consider a track event now. The small country school of "Cactus" took 1st place with every child competing in homemade uniforms of "Black and Orange" made by their mothers including Retha's mother, Lulanell. Retha was one of the star runners at this competition placing 1st in her events and her younger sister Lorene came in third to help with the trophy win. Mt. Olive Placed 2nd making the little country schools the victors!

Retha went to high school in Tribune KS, pursuing home economics and as a drum majorette, she was adept in twirling 2 batons simultaneously!! (Her prize for that was a broken nose.)

After high school it wasn't long until she traveled to CA to visit family and reconnected with her future husband Dale L. Hubbs who was attending Naval Boot Camp. Dale began courting Retha soon after. He transferred to Corpus Christi, TX for Naval Air training and he ask Retha to come to TX and marry him and she agreed. They were married December 14th 1944. Soon they traveled to Florida for more flight training. After the war ended, they moved to Boulder CO where they established their home and grew their family, while Dale attended pharmacy school.

When Dale graduated, life found them in Tribune, KS to become owner – operators of T.K. Drug. In 1955 it was off to Lovell, WY and the purchased the Busy Corner Pharmacy. In 1973 came a career change and a move to Saratoga, WY to co-own and operate the Reverse L Diamond Ranch. In 1980, with their parent's health failing they again moved to Sharon Springs KS. One of Retha's joys while living in Sharon Springs was to drive a school bus and make cookies for the children who rode with her. Dale and Retha made a few more moves and as you can imagine that in all these moves Retha became very proficient in packing and unpacking!!!

Throughout her life she owned a milk cow and made butter and cottage cheese for her family to enjoy and to sell. She also made a famous sour cream chocolate cake that was to die for, passing down the recipe to her oldest granddaughter.

Retha worked side by side with her husband Dale in laying a foundation of love, responsibility, commitment and continual example of a solid work ethic for their children, and for an understanding of life in hard and abundant times.

She was a devoted wife and mother. We celebrate Retha's life and because of our faith we rejoice that she has now joined our father, "the love of her life".

Retha was preceded in death by her parents, her husband Dale (2009), one daughter Jonell and one sister Lorene Giesick.

There will be a private family memorial in Wyoming at a later date.

For memorial donations the family requests they be made to the Alzheimer Association. You can find more about Alzheimer's and where to donate to research at this link. https://www.alz.org/ (Donate link and the address of the home office is at the bottom of the link page.) Condolences may be sent to www.zieglerfuneralchapel.com.

This address is for additional information on the disease. https://www.alzheimers.net/