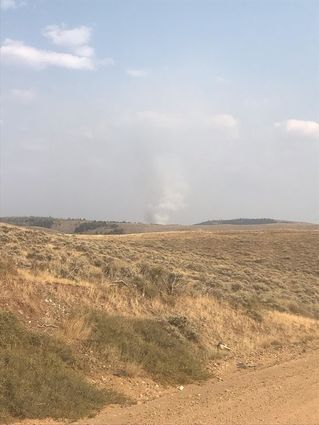 *UPDATE* Originally named the Savage Run Fire, it is now called the Mullen Fire. Information is current as of September 22 at 12:44 p.m.

According to Carbon County Fire Warden Ron Brown, hunters and campers in the area are in the process of evacuation following notification by the Carbon County Sheriff's Office. Brown added that the fire is entirely on USFS property. The A-Bar-A Guest Ranch has volunteered a portion of its property to serve as an Incident Command location in fighting the fire.

Due to the nature of the area in which the fire has originated, the options in fighting the blaze are limited. With it being a wilderness area, fire engines cannot enter. Additionally, the wilderness area provides a significant amount of fuel load and challenging topography, according to Brown. The USFS is utilizing single engine air tankers, a Type 3 Helicopter and two Type 1 Helicopters in fighting the blaze. Brown also said that an Initial Attack Hand Crew was on the ground.

At this time, no retardant is being used on the fire due to the restrictions in the wilderness area.

Aaron Voos, Public Information Officer for the USFS, stated that the hand crews were not engaging with the fire at this time. They were, instead, helping coordinate the aerial attack of the fire and would only engage with the fire if it was determined safe to do so.

In addition to working with Carbon County, the USFS is working with neighboring Albany County. While no evacuation of the Rambler Subdivision near Rob Roy Reservoir has been ordered, they have been notified of the potential danger the fire poses.

Voos informed the Saratoga Sun that the following areas were high with fire traffic and encouraged hunters and campers to avoid them; Forest Roads 511 and 512, portions of Forest Road 500, the Pike Pole Pickaroon Area and the Mullen Creek Area.

At approximately 9:30 a.m. on September 18, the USFS announced a forthcoming area closure through the Inciweb for the Mullen Fire and that evacuations of Rob Roy Reservoir and the Rambler Subdivision were underway. The fire, which had grown from 60 acres to 80 acres on Thursday evening, had grown to 200 acres as of Friday morning.

As of 3:40 p.m. on September 18, the Mullen Fire had grown to 644 acres and was moving northeast. An area closure by the USFS had, as of that time, not been signed though was still expected to be issued at some point. According to the USFS in the update through Inciweb, there were "minimal natural fuel breaks" in the direction that fire was burning.

On social media, residents had asked if donations to the fire fighters, such as water or food, were needed. The Saratoga Sun reached out to Voos about the desire by some residents to provide aid, to which Voos replied that aid should be directed to the local departments.

"We are very grateful for the offers from the community. At this point, the best point to direct donations of that sort are your local volunteer fire departments," said Voos. "They are assisting on the Mullen Fire and can always use donations."

Chief Cory Nuhn of the Encampment Volunteer Fire Department informed the Saratoga Sun that the A-Bar-A Guest Ranch was taking "good care" of the local departments that were still aiding the USFS with the Mullen Fire but wanted to thank the residents for their offers of aid.

As of approximately 8:20 p.m. on September 18, the Mullen Fire had drastically increased in size to 2,000 acres. Along with increasing in size, the fire was almost moving in the east, northeast and southeast directions. The increase in size of the fire follows a massive closure order surrounding the Savage Run Wilderness area. The order can be found here (https://www.fs.usda.gov/Internet/FSE_DOCUMENTS/fseprd807284.pdf) and the map of the closure can be found here (https://www.fs.usda.gov/Internet/FSE_DOCUMENTS/fseprd807299.pdf).

It is expected that the Mullen Fire could cross the wilderness boundary in the Cottonwood Creek drainage tonight. Additionally, the Keystone area has been been given notice to evacuate.

As of the morning of September 19, the Mullen Fire had nearly doubled in size as it grew to 3,855 acres. Speaking with Brown on Saturday morning, the Carbon County Fire Warden stated he had worked with USFS Law Enforcement and Carbon County Sheriff's Deputy Casey Lehr to ensure that everyone was evacuated from the area. Brown added that additional air and ground resources were incoming and that two fuel breaks had been established along Forest Road 500 and Forest Road 512.

With red flag warnings in place for Saturday, Brown said that there was a potential for significant fire growth. He added, however, that as fire crews worked to contain the Mullen Fire it was also a matter of making the best of a bad situation as the fire was clearing out blowdown and beetle-killed deadfall.

The Saratoga Sun also spoke with Voos on Saturday morning. According to Voos, the Mullen Fire had advanced out of the wilderness area and was approaching Forest Road 512 and single-engine air tankers were currently working on that perimeter of the fire. While the USFS had discussed the potential of using fire retardant on Forest Road 511, it was unclear what good it would do as the fire was advancing at such a fast rate.

Helicopters and ground crews were still working on the western edge of the fire at the A-Bar-A Guest Ranch on Saturday morning and had been successful in keeping that perimeter in check.

Rambler, which had been evacuated on Friday, was well within the path of the Mullen Fire. Voos stated that there was concern about the fire reaching Rambler. Due to the wind and the fire being directly under the large smoke column, it was difficult to tell how close the blaze was to Rambler.

The USFS is still encouraging the public to respect the area closure surrounding the fire. Hunters and campers who have been evacuated have reached out to the Forest Service about being able to retrieve tents and campers, which Voos said was unlikely at this time due to the rapidly changing nature of the fire.

As of Saturday evening, the Mullen Fire has grown to 7,000 acres in size. The USFS had begun to utilize a VLAT (Very Large Air Tanker) and multiple LATs (Large Air Tankers) with both water and regarded to protect the Rambler area from the Mullen Fire. On the east side of the fire, it had moved out of the wilderness area and across Forest Road 511.

The USFS also increased the area closure surrounding the Mullen Fire, extending east to the national forest boundary and north to Highway 130.

By Sunday morning, the Mullen Fire had nearly doubled in size despite the downpour of rain Saturday night. Mapping from the USFS put the fire at 13,835 acres. 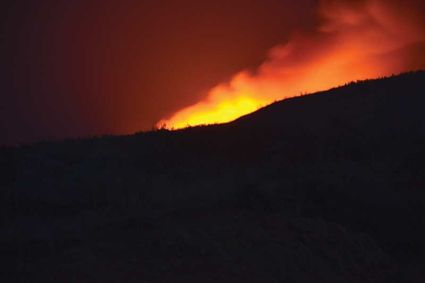 On Sunday afternoon, Albany County Emergency Management requested a full evacuation of the Keystone area to allow more focus on fire mitigation. Additionally, due to strong winds and the movement of the Mullen Fire, Albany County Emergency Management had put Centennial Valley to prepare for potential evacuations. That area included private land owners along Fox Creek Road, the communities of Albany and Centennial and along Highway 130 in the Snowy Range.

On Tuesday morning, a Type II Incident Management Team—the Rocky Mountain Area Incident Management Blue Team—took over command of the Mullen Fire. Additionally, a Facebook page (https://www.facebook.com/MullenFire) has been set-up and a virtual community meeting will be held on September 22 at 5 p.m. via Facebook Live. More detailed mapping on Monday afternoon put the size of the fire at 13,504 acres, down from the original estimate of 13,835 acres.

The recently renamed Mullen Fire now has now been assigned an Inciweb: https://inciweb.nwcg.gov/incident/7208/.

The Saratoga Sun will work to provide updates as they become available.