Gathered up to the present

After four years of work, Elva Evans' 'Saratoga 150 Years' to be released on September 11 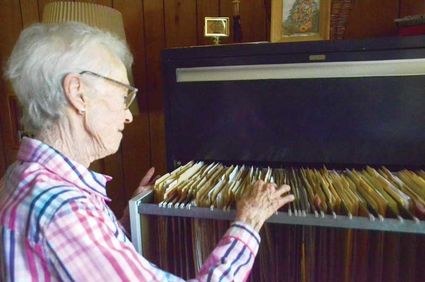 Elva Evans looks through her files which she has gathered over the years and used in the writing of her new book.

It is, perhaps, an understatement to say that the Upper North Platte River Valley has a wealth of history. From copper mines to coal mines, from manifest destiny to the lumber industry, the Valley and the communities within its borders have a unique story.

Fortunately, there are a handful of books-from Candy Moulton's "Grand Encampment" to Gay Day Alcorn's "Tough Country" to "Saratoga and Encampment Wyoming: An Album of Family Histories"-that can help guide even the most novice local historian. This week, longtime Saratoga resident Elva Elvans will officially release her contribution to the...