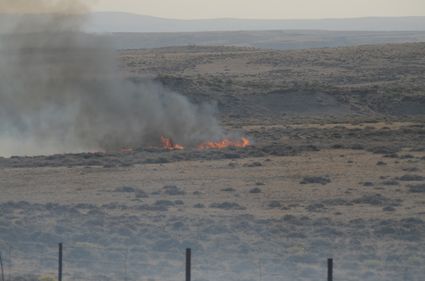 A section of the 316 Fire burns on Sunday morning outside of Hanna, Wyoming.

*This article was updated on September 7 at 2:15 p.m. to reflect the most recent information available.*

Approximately 67 families, including 200 individuals and 100 animals, are temporarily displaced following a massive fire on the outskirts of Hanna. The fire, which began on September 5 along Carbon County Road 316, spread quickly due to high winds and dry weather.

According to Lenny Layman, Carbon County Emergency Manager, the 67 families forced to leave Hanna due to the massive blaze have been relocated to seven hotels in Laramie and one hotel in Rawlins. The American Red Cross mobilized from Cheyenne and set-up at the WalMart Supercenter in Laramie to provide hotel vouchers to displaced Hanna residents and will be providing breakfast and lunch today.

The fire forced the shut-off of power, gas and water in Hanna and an effort is currently underway to re-establish power and water to the town. Layman stated a plan to re-establish gas would need to be more precise as it would require the re-lighting of pilot lights in homes throughout Hanna.

As of the morning of September 6, there were no containment numbers on the fire and it was estimated to be over 10,000 acres. While Highway 30 had been shut down to traffic on Saturday, it had re-opened at approximately 11 p.m. that night. Currently, Highway 72 is the only highway closed to traffic.

At 11:00 a.m. on September 6, Layman informed the Saratoga Sun that the Carbon County Office of Emergency Management was coordinating with local authorities to allow evacuated Hanna residents to re-enter their homes. That re-entry will be effective as of 1 p.m. and Hanna residents would be asked to use US Highway 30.

Layman informed the Sun that power had been restored to all homes in Hanna and Black Hills Energy would be going door-to-door to relight the pilot lights for customers who had natural gas services. Residents, upon returning to Hanna, are asked to shelf in place. American Red Cross has been aiding the Carbon County Office of Emergency Management to directly contact those evacuees who have been using their services.

Anyone with questions is asked to contact Carbon County Dispatch at 307-324-2776 and press option zero.

In a Sunday afternoon phone call with Layman, it was reported that residents were successfully able to return home allowing both American Red Cross and Albany County Emergency Management to demobilize.

In a message from Hanna mayor Lois Buchanan, it was confirmed that the Town's water treatment plant was 100 percent operational and that no structures were damaged. While some on social media had expressed concern about the cemetery being damaged by the 316 Fire, Buchanan informed the Sun that it "has minimal damage in one corner."

"Things are wrapping up around here," wrote Buchanan. "Fire crews are still on (the) ground but many agencies were able to return home. The out pour of help was absolutely phenomenal!"

In a Sunday afternoon phone call with Carbon County Fire Warden Ron Brown, the exact size of the fire was reduced from the original 10,000 acre estimate given Sunday morning to 7,500 acres. This estimate corresponds with one given earlier in the day by the Bureau of Land Management in a press release. Brown added that it is not uncommon for the size of the fires to change as more detailed mapping is performed. As of 4:30 p.m., the fire was still at zero percent containment.

On Monday afternoon, the Saratoga Sun spoke with Brown again about the 316 Fire. Brown informed the Sun that the size of the fire after the most recent mapping effort had been set at approximately 14,201 acres. As of 1:30 p.m., the fire was at 30 percent containment with Brown expecting containment to reach 70 percent by later Monday afternoon. He added that the incoming cooler weather and potential precipitation would help with the containment.

The fire warden did not expect much fire growth as any fire activity on Monday was occurring within the perimeter. Any structures in Hanna and the surrounding area were safe from the blaze and Brown confirmed what Buchanan had stated on Sunday that the water treatment plant had been undamaged by the fire. Additionally, initial reports of a fire engine being damaged by the 316 Fire proved to be untrue. While the fire engine had appeared to be caught in one of the initial increases of the fire, it was still 100 percent operational according to Brown.

As of Monday afternoon, the fire was still under investigation, though Brown stated that he believed he would have a conclusion within the next few days that would be released to the media.

The Saratoga Sun will work to provide updates as they become available.