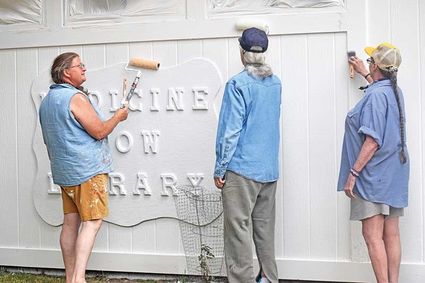 From left, Ellen Freeman, Medicine Bow Librarian Bonnie Culver and Elle Williams finish some touch up painting before starting on the trim.

Bonnie Culver, the branch manager at Medicine Bow Library, put out a call to volunteers to help put a new coat of paint on the library this weekend. It worked. By Saturday afternoon the trim was being finished and the building was completely painted.

Culver said the building has needed the coat for some time.

She saved money from book sales and was curious about how much it would cost.

Culver reached out to Hanna residents Ellen and Dale Freeman to help. The couple came to Medicine Bow and pressure washed the building, sanded it and got everything ready.

"Dale came and spray painted it on Thursday and then came back Friday to do a second coat," Culver said. "The sprayer stopped working the second day, and Ellen and I went around the building with rollers."

E. Freeman said she was tempted to throw the sprayer off a cliff when it stopped working.

She added the building needed painting.

"It needed to happen, especially the far end because it is going rotten," E. Freeman said. "The paint will help stop that." 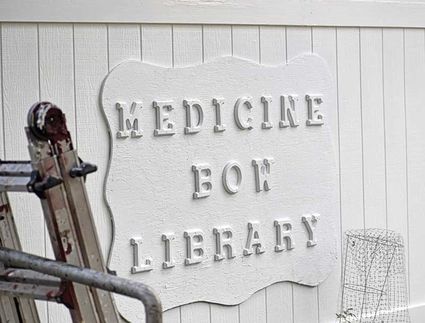 The Medicine Bow Library received funds from the county for a new coat and was painted by volunteers.

The group of volunteers came early Saturday morning, but were stopped by rain. They waited several hours before finishing up the project by Saturday afternoon.

Toni Wickhizer, Lynda Golden and Elle Williams, in addition to the Freemans, helped finish up the trim on Saturday.

"So five of us got the trim painted and it did not rain on us any more," Culver said."I am so thankful that Mr. Piche was so good to get us extra paint and caulk that we needed."

Culver said the painting of the county building getting completed was due to a lot people's efforts.

"I am so grateful to Sue Jones," Culver said. "The Freemans did so much work to get it ready to paint and then Dale sprayed it twice. It is so nice to have volunteers that are so helpful. The library looks so much better because of so many peoples' goodwill."