'Stampede'-ing to the University of Wyoming 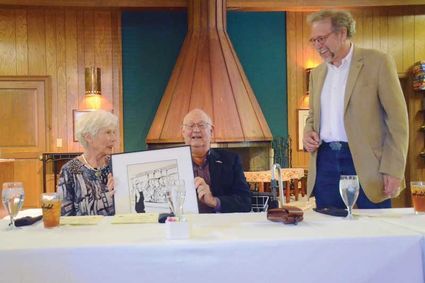 Ann and Jerry Palen pose with one of Jerry's framed cartoons, presented to the couple by American Heritage Center Director Paul Flesher.

What do Stan Lee, C.J. Box and Jerry Palen all have in common?

While they are each creative people, all three are also included in the American Heritage Center at the University of Wyoming in Laramie. Palen's long-running cartoon "Stampede" was recently added to the extensive collection at UW. The cartoon series will be part of the Jerry Palen Papers, which include a variety of horse memorabilia and saddles.

The cartoon series followed the daily life of Elmo, Flo and their dog, Dammit.

On August 10, Palen and his wife, Anne, were joined at the Eagle's Nest at the Old Baldy Club by members o...