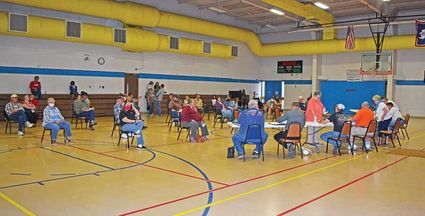 There was a large crowd at the Hanna Recreation Center to discuss options of where to put the newly acquired dumpsters.

The Hanna Town Council, the High Country Joint Powers Board (HCJPB) and Department of Environmental Quality (DEQ) representative Craig McComie met at 6:30 p.m. on July 29 at the Hanna Recreation Center gym to talk to the residents of Hanna about the landfill closure and dumpsters.

The town council called the meeting to get input from the community. Residents from Elk Mountain and Medicine Bow were also in attendance.

Until about four months before the closure, the town of Hanna had been slated to have a transfer station built at the landfill site. It became apparent, just before spring, the cost of the building was going to be more than the HCJPB could afford or ask residents to subsidize. The cost had escalated to the point an alternative had to be figured out.

It was determined the least expensive way by HCJPB for Hanna to get rid of its trash would be to bring 180 dumpsters to the town of Hanna and have the trash hauled the way it was in the sister towns of the north.

The recreation center was used for the meeting instead of the Hanna Town Hall to adhere to social distancing protocols. The town hall can only safely handle about 15 people total.

A lot more than 15 people showed up.

Even without social distancing, the Hanna Town Hall would not have been able to handle the crowd that attended the meeting.

Besides the board, council members and speaker, there were over 80 people in the audience.

The gym is large, so social distancing was able to be adhered to.

The representative from DEQ gave a history on how the landfill closure came about.

"The legislature, in 2013, made a program, landfill remediation, to assist local communities that are close to their landfill and help them construct a transfer station," McComie said. "This was because, in 2007, there was a program created to install groundwater monitoring at the landfills around the state."

McComie said the monitoring started showing groundwater being impacted by most of the landfills in the state. Many of these landfills had to close because they could not afford the cost of lining their landfills so as not to impact the groundwater. This is how the program of landfill remediation came about.

Hanna landfill had to close because linning the landfill would have cost $1.5 million dollars.

He said that when the transfer station had first been thought of as the answer for how Hanna would dispose of its trash, the cost for the building had been under $200,000. At least five years passed when it came time to get the transfer station built. The cost had ballooned to $500,000.

The HCJPB, with consultation of mayors and town councils, created a system that all towns would have dumpsters for resident's trash, which in turn would be hauled to the Laramie landfill.

It was now up to the Hanna residents to give input if they wanted to have the dumpsters scattered throughout town, have them clustered in one or two locations in town, or a combination.

One resident asked McComie if the railroad could be utilized in hauling the trash to Laramie. His answer was that the infrastructure to build such a transit point from Hanna to Laramie would be cost prohibitive.

Residents wanted to know why it seemed like everything happened at the last minute. There were questions about if HCJPB had known the transfer station was not going to be able to be built.

McComie and HCJPB Chairman Toby Smith answered the questions but, on occasion, a member of the audience would cut off the speakers.

Buchanan was having no rude behavior.

"One thing we are going to understand right now is that if anyone starts to get out of hand, there is the door," Buchanan stood up and told the crowd. "If we can't be civil to each other, we don't need to be here."

The tone of the meeting settled down, but questions did not address the dumpster situation, but focused more on why the town was finding out about it now.

Morgan Irene, HCJPB member and mayor of Elk Mountain, pointed out there had seldom been any citizen participation during the years of meetings about the landfill or residents would know the changes of personnel to the board and policies had changed, too.

"We have literally been dealing with this since 2006," Irene said. "During this time, it has not been the same people. You have election cycles and, just as we would get everything going in one direction, you would have a new set of people, not only elected officials but on the appointed board. So it has been really difficult to have any continuity whatsoever to move forward."

He said to get to the point where the towns were with trash disposal, special meetings have had to be called between mayors because forward progress was not being made in solving the problem. The consensus is for all towns to take care of the garbage in house. This means each town's public works will take over getting the trash to Laramie.

HCJPB will still control the Hanna landfill and all monitoring.

"The clock is ticking," Irene said. "No one would agree to anything. All original plans had changed."

Ann Calvert, HCJPB bookkeeper and Hanna Town Clerk, gave the audience a dose of reality to move the meeting forward.

"Here is the thing," Calvert started. "Back in the beginning, Hanna didn't want the dumpsters, they wanted the building. Hanna was promised a convenience center building. They were promised a lot of things from the town representatives of the board. It doesn't matter, because it wasn't feasible. So it's not going to happen. Now we have to deal with it and this is how we have to do it. We are going to have to get along and figure out the best we can do this."

The meeting then centered on what to do with the dumpsters in town.

Larry Krokow, Director of Public Works. said that dumpsters had to be put in places that would not hinder snow removal in the winter.

The meeting went on, and different opinions were voiced, but no decision was made as the meeting concluded.

There will be a HCJPB will be meeting at 6:30 p.m. on August 6 at the Hanna Town Hall and the dumpsters locations will be addressed.