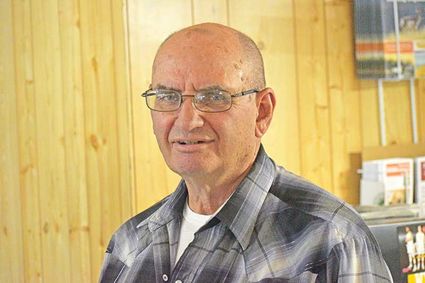 Bill Jones has been collecting artifacts for many years around Elk Mountain helped establish the Elk Mountain Museum in 2014.

Editor's note: This is the first in a series on museums in Carbon County.

There are seven museums in Carbon County. Some have been around for decades and others are still fairly new. It takes time, vision, fund raising and motivated founders to make these cultural institutions come to life.

The newest museum in the county is the Elk Mountain Museum. It was established in 2014.

"I have always wanted a museum here," Bill Jones, one of the founders said. "I started collecting things and I had thought I would put them in the old sauna."

The 'old sauna' is a building erected by the Finns that were some of the first settlers and was the town's public sauna.

"Then one day Joyce Menke and Tammy Page called me and asked me if I would help start a museum," Jones said. "This all started in 2014 and began in a building that had an art gallery in it."

Jones said he and Menke donated a large portion of artifacts to the museum in the beginning. He said soon after, residents from the town started, too.

Angie Hobbes, Elk Mountain Museum Director, said that still is the case even though the museum moved in the spring of 2019 to the town's old library building, giving the museum more room.

Hobbes said the town of Elk Mountain has designated more land for growth. Jones said it has been exciting to have the museum get larger in a quick time frame and is pleased the town is contributing to its further growth.

Both Hobbes and Jones said the move allow the museum to have a sheep wagon and a mail wagon to be brought on site.

Jones said he is happy the history and culture of Elk Mountain is being preserved for future generations.

"The Overland Trail goes right by here," Jones said. "Elk Mountain was known as "The Crossing" and there was a toll bridge."

The United States military used this route and bridge to carry gold out to the Western posts during the Civil War. Elk Mountain supplied support beams for the mines in Carbon. Hanna was not even a town during this time.

Jones said a convoy of miners were bringing mine props to the mines in Carbon from Elk Mountain when they were ambushed near a small lake by hostiles. All miners were killed and their blood turned water red. Today it is known as Bloody Lake.

Jones said when Carbon started to die, buildings were taken apart and rebuilt in other towns, including Elk Mountain. The Elk Mountain church is built with lumber from Carbon.

Hobbes makes clear the founding members volunteered their time to open the museum in the beginning and staff it.

Jones said it was all worth it.

"We have so much history out here and we should do our best to save it for future generations," Jones concluded.

Down the road along WY 72, about 17 miles from the Elk Mountain Museum, is the Hanna Basin Museum.

Susan Tlustos, a founding member of the Hanna Basin Museum, remembers the idea for a museum started in the early 1980s. Tlustos had come to Hanna as a fourth grade teacher in 1979 and was interested in the history around her. She said Kim and Ken Besel, Muriel and Jim Kitching, Carl Berger, Phil Rheindold, Nancy and Victor Anderson and Carol Boan Smith were all interested in history and eventually became the founders of the musuem.

"We weren't really a board, we were more like a club," Tlustos said. "Muriel saw that the history of Hanna was dying and going away, she just needed people to know what this city was like. But it was really very informal and our original name was Miners Memorial Group."

Tlustos said because there were several nationalities that lived in the town, each of these cultures contributed to Hanna.

"It is the little things that get lost if you don't save them," Tlustos said. "Muriel wanted to make sure this didn't happen. She was also passionate about memorializing all the miners that died in the mines."

The group started with the Community Hall building, which is still the main building. Tlustos said AML helped renovate the inside to make it habitable.

"Without AML, I doubt we could have fixed up the Community Hall. We just didn't have the funds," Tlustos said. "It was substantial what they did."

Tlustos said artifacts were donated by all.

The cottage that is on the museum grounds next to the Community Hall was moved to its location because of a grant from Union Pacific.

She said the labor for laying the foundations were done by members of the board.

"Ken and Victor did a lot of the physical labor," Tlustos said. "Without their work and others that helped, even with the grant, we could not have afforded to have moved the cottage."

Tlutos said the newest building to the museum grounds that was built within the last two years had so many volunteers, she couldn't list them all.

"Our volunteers have been wonderful," Tlustos said. "The cottage was refurbished inside by Chuck Combs who was a master plasterer. He did amazing work and was able to get Arch Coal to help with funds."

Tlustos said the museum exists because of all the drive and dedication of the volunteers over the years.

Another building will come to the Hanna Basin Museum grounds in the future. The museum has mining, railroad and ranching exhibits and soon an interpretation center honoring the Lincoln Highway will be built.

"It will be another piece of the local history," Tlustos said. "It will be a wonderful attraction."

She said the current Hanna mayor, Lois Buchanan, has been very supportive. Tlustos said the town's public works is very helpful in maintaining the grounds during all season long.

She said families like the Withrows and the Loves have been very generous to the museum with funds and artifacts. Goups like Hanna Agricultural Resource Team (HART) are helping put gardens around the cottage.

Tlustos said she would like to see the museums of Elk Mountain and Medicine Bow work closely together because the towns share so much history, culture and families.

"It is because of old Carbon, which is smack dab in the middle of all three," Tlustos said. "It may be a ghost town now, but its influence is still felt to this day."

Tlustos points out the reason the museum is called Hanna Basin is because it includes artifacts not only from the town of Hanna but the surrounding areas.

She said the original board was the driving force with getting the museum started, but it was the volunteers and the people of Hanna and the surrounding basin who have made the museum what it is.

In the Valley, the Saratoga Museum is only a little older than the Hanna Basin Museum. It opened its doors in 1980. Dick Perue is one of the founding members of the board.

Perue attributes a lot of his love for history coming from the days when he learned the trade of printing and working for newspapers. He also minored in history at the University of Wyoming.

"So much of the equipment is historical now. It took six years to be a master printer, so you can imagine how much there was to learn," Perue said.

Perue said although he was a founder of the museum, he didn't serve on the board of directors. He said other founders were David Chastain, Bob Randall, Miram Gelman, Dan Simmons and Don Erikson.

He said the mission was to save the local history. In the beginning, the organization was more of a cultural group that was named the Saratoga Historical and Cultural Association. Perue said, in the beginning, there were many foundations that helped fund the museum.

"It is a lot easier to establish a museum than it is to maintain one," Perue said. "A lot of people never think about it, but it gets more expensive every year to maintain a museum."

Perue credits Bob and Mary Martin, former owners of the Saratoga Sun, for keeping so much history in old newspaper articles.

"I worked for them starting in 1954 and eventually bought the paper in 1968," Perue said. "There were 60 boxes of manuscripts, glass plates and negatives. Bob asked me to take care of it and make it available to a museum. He wanted me to preserve it all. That is what I have been doing as I sort out all this stuff."

The beneficiary of all his work to catalogue and discern these historical documents and artifacts is the Saratoga Museum.

In 1979 Perue said the Saratoga Historical and Cultural Association raised money by forming the Over the Hump Club. It raised $13,500 in two weeks. It cost $250 to join. 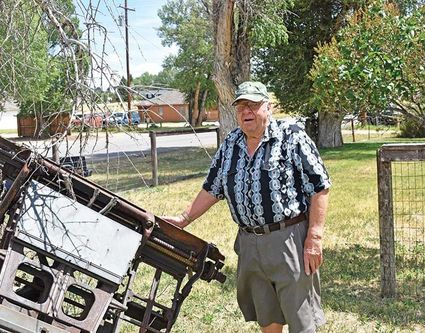 Dick Perue poses next to his linotype machine that sits in his front yard.

"It was very successful," Perue said.

Perue has a huge collection of historical pictures, many from Bob Martin boxes. The one museum Perue won't give any of this material to is the Carbon County Museum.

"Bob told me he had given them material and it just stayed in boxes," Perue said. "So I don't contribute any of Bob's stuff to the Carbon County Museum."

Perue loves doing work for the museum. He gives tours of the area when he can.

He is hopeful the Saratoga Museum will become a special tax district. He said the museum needs this to happen or the museum could run out of funds since many endowments have dried up.

"History preservation is there," Perue said. "But you need to have people that you pass it along to."