Beach at The Yard 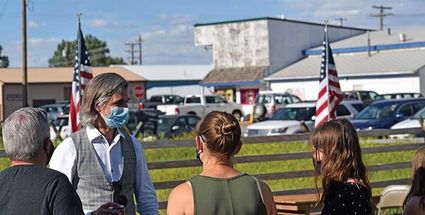 Congressional Democratic candidate Carl Beach talks with attendees at his meet and greet on July 3.

The evening of July 3 saw The Yard in Saratoga play host to three Democratic candidates as part of a meet and greet organized by Beach of Congress. Valley native Carl Beach, who is running for the U.S. House of Representatives, was joined by U.S. Senate candidate Yana Ludwig and Merav Ben-David.

The event, held outdoors, allowed for social distancing and masks were required for attendence.

The first hour saw the candidates talking with attendees. There were refreshments and acoustic music in the background by Jason "J" Shogren.

"I am a climate scientist. I study the effects on various species and eco-systems, the most iconic being polar bears and that is why he is the mascot for my campaign," Ben-David said. "Over the years, I have been collecting data and analyzing it and making recommendations to different advocacy groups."

Even working with these groups, Ben-David felt she should do more and decided to run for the senate seat. Ben-David said her platform is called the three Rs; Rescue, reimagine and rebuild.

"We have to rescue our workers, the nation, the people," Ben-David started. "We are going through one of the worst pandemics and going through an economic meltdown. People are losing their homes. We have to take the blinders off and think about the future. We have to reimagine how we can help Wyoming. Then we put these ideas into action and we rebuild."

Ludwig attended Carleton College and received a bachelor's degree in interdisciplinary studies from Eastern Michigan University. She is a founding co-director of the Land Trust for Collective Liberation and is a podcast host on Solidarity House. She is a member of the board of directors for the Foundation for Intentional Community and is a founding member of the Solidarity Collective.

"I'm essentially running because my children are being handed a world of increasing instability and that is economic, it is social and it is climate," Ludwig said.

She pointed out young people are being saddled with incredible debt, racial tensions are up and the climate is worrisome. Ludwig has been putting forth platforms to address the questions on how to solve these problems.

"What we need is to give attention to those Wyoming residents that don't usually get it," Ludwig said.

She gave the example of disabled as a large minority who seldom had a voice they deserved. Ludwig said many working people were earning a wage that wasn't sustainable. She also said the economic crisis and climate were tied together and both needed to be addressed. Ludwig added she saw the sense of legalizing marijuana and not making criminals out of residents who use it medically. Her progressive agenda and plans drew heavy applause from the attendees.

Beach was the last candidate to speak.

"It is great to be in front of my hometown running as a congressional candidate for the whole state. It is almost unreal," Beach said. "Some people have agreed with me, that it is unreal for someone who comes from a humble background can compete against a juggernaut like Liz Cheney. My answer to that, I am from Wyoming."

He said diversifying the economy has been talked about since he can remember but not put in practice.

He said Cheney is influenced by outside interests that are entrenched to keeping Wyoming in the past and won't move forward. 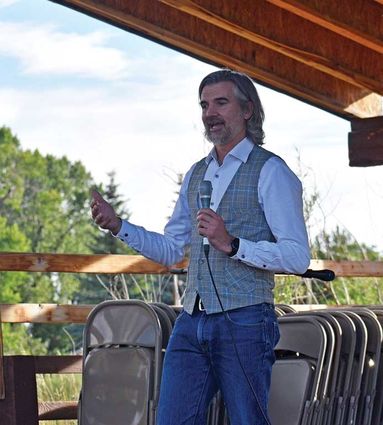 Carl Beach states why he is running for congress.

Beach said he understood how broadband technology was important to the state for development and how recreation made the state special.

"I understand all this and we need someone in Washington who works for the people of the state, who will protect Wyoming's environment for future generations," Beach said. "We need someone who thinks about the 21st century and Wyoming's place and not live in the past. I really think I am that person."