Tea garden to return to Hanna at Hanna Basin Museum 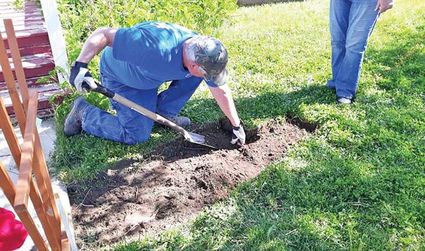 Perry Goodrich, Director of HART, digs a hole in preparation for the Hanna Basin Museum's tribute to the turn of the century tea gardens that once dominated Hanna.

The Hanna Agricultural Resource Team (HART) met at 9 a.m. on June 13 at the Hanna Basin Museum to work on the historical tea garden the group had offered to create for the museum.

Members Linda Goodrich and Rose Dabbs have looked at compiled lists of flowers and pictures of English gardens that were once common in Hanna during the turn of the 20th century over the past year. The Hanna Basin Museum had asked HART to put in an English garden at the cottage back in the summer of 2019.

The museum and HART came to an agreement to have the group replicate these gardens with plants and flowers f...