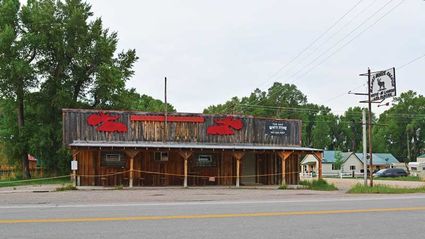 The Mangy Moose was recently a subject of discussion at Riverside Town Council.

The Riverside Town Council met at 6 p.m. on Thursday at the Riverside Town Hall. Mayor Leroy Stephenson and all council members were in attendance. The first order of business was a public hearing on issuing liquor license renewals for Encampment Hospitality and Mangy Moose.

"I have a letter from the Mangy Moose," Stephenson started. "To whom it may concern, in light of COVID-19, the Moose LLC has no plans to open this year for business and understands that if there is a plan to open in the future, that the Town of Riverside and the State of Wyoming is to be notified prior to any opening."

Stephenson said the Mangy Moose looked to be closed for the coming year.

Stephenson then read an email from Margaret Weber.

"I know my opinion doesn't account for much, and could be construed as biased as I have a conflict of interest being the other license holder, but I feel compelled to say something in regards to the Mangy Moose liquor license renewal.

It has been over a year and nothing has happened with the business. I don't believe there is any intention of opening the Moose in any form–bar, cafe, liquor store or whatever–and tying up the license is only for a perceived value to potential buyers. However tying up the license on a vacant property is detrimental to the Town of Riverside.

There are several other properties on multi-use that could benefit from this license and, in turn, benefit the town in form of tax revenue. If there are plans and set a date as to when the Moose is going to open, then I say absolutely grant them the license upon opening but, if there isn't any intention of opening, I don't see why the town should let the only other license sit idle attached to a vacant property.

If they don't open before August of next year, the state will revoke the ability for them to hold a license anyway,. Why not allow another multi-use property the chance of using this license. Those are my two cents," wrote Weber..

Jan Cook, the town clerk/treasurer, said she didn't know of any businesses that had shown interest in the license.

Stephenson cited one business that might find use of the license if it was available, but he said they had not contacted him about it.

"I don't think it is fair to lock it up, if there is an opportunity for another to use it," Councilmember Ed Golden said.

Stephenson said the Mangy Moose had applied for the renewal last year at this same time and had not opened the business.

After discussion, the council decided to table the renewal and find out the owner's plans. They will revisit the renewal next month and have the owners attend the meeting.

After the motion was passed, the public hearing was adjourned.

Next, the minutes from the regular May 14 meeting were approved. The financials were approved quickly thereafter.

Helen Weiland from South Central Wyoming Emergency Services (SCWEMS) said the organization had gotten to the point that it was giving out quarterly balance sheets to all entities.

"We have been questioned why there seems to be extra money on the balance sheets," Weiland said. "The extra funds come from the impact assistance projects. At this point it is about $360,000. We use that for the air ambulance service."

She said two new chase vehicles had been purchased.

"One for the south side and one for the north side," Weiland said. "They are four wheel drive and have all the lights, bells and whistles plus camper shells, so equipment can be carried to a scene. Up to this point, our chase vehicles had been used."

She said the Saratoga ambulance barn expansion was coming along as planned.

The Riverside Party Day was discussed but no decision was made. The council wanted to wait until next month and see what restrictions would still be in place.

Stephenson said a seven percent increase for the sewers was needed. The council approved making a resolution for the rate to $30 from the current $28.29 for residential and the commercial rate would go from $56.58 to $60. The resolution will be voted on at the next council meeting.

Lee Ann Stephenson from the Sierra Madre Joint Powers Board said there were two job openings for water operators. She said the replacement project of valves and fireflies was postponed until the bonds from the 6th Penny Tax get sold.

Mosquito fogging was to start on June 15.

Weiland said she has put out pellets to kill mosquito larvae.

The council approved a fiscal year 2020-2021 blanket voucher. This is to help with payroll get out in a timely manner and was suggested by the auditor.

The last of order business was the approval for Jamie Waugh to transfer the town's ordinances to the town's website.

The next regular meeting will be at 6 p.m. on July 9 at the Riverside Town Hall.