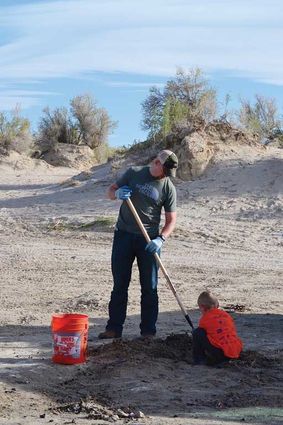 Kyle Murphy and son, Sam, help in cleaning up Sandy Beach on May 18.

Over the past several years, Saratoga Lake has arguably been one of the recreational destinations of the area. Aside from being host for the annual Saratoga Lake Ice Fishing Derby for nearly 40 years, Sandy Beach has served as a summer recreation spot. Along with the recreation, however, comes litter.

At the May 19 meeting of the Saratoga Town Council, Councilmember Bob Keel informed the council of efforts he had recently undertaken to clean the location.

"With the quarantine in place and with school being out, one of the outlets my family, and I know a lot of other families, have used is Sandy Beach to recreate. Especially with this warmer weather. About a week and a half ago, my son was out there playing in the water without water shoes on and was cut on a piece of glass," said Keel.

Keel organized a handful of families to begin cleaning Sandy Beach and, according to the council member, yielded a shocking amount of waste. In addition to .22 shells and .40 caliber shells, nearly 50 pounds of broken glass and nails were also removed from the beach. He added that there appeared to be driftwood that was the result of wood procured from the sawmill and used for fire at the beach only for wet or unburned wood to be pulled out into the lake.

The council member asked the rest of the council if they were open to a more stringent ordinance in regards to Saratoga Lake. Under Chapter 12.16.040 of the Saratoga Municipal Code, the only mention of littering at the lake is that it is "unlawful."

"I would like the town to look for, possibly, a town ordinance on prohibiting things such as fires that are not in a firepit, any glass containers, any wood that would have nails or debris that could be left over after the burn so that we could avoid this in the future," Keel said. "It's a problem where people are not being responsible when they go out there and I'd like to give the Town any teeth it could to help stop that from happening."

In discussion, it was stated that the Town of Saratoga would need to install fire rings or fire pits at Sandy Beach and possibly increase the amount of trash receptacles at the location.

A motion was made for an ordinance to amend Saratoga Municipal Code that would explicitly state that any fires must be in fire pits, glass containers and overnight camping are prohibited, and to propose a fine for violation. The motion passed unanimously.