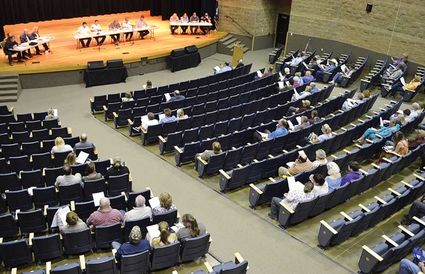 Over 90 people gather in the PVCC Theater on June 4, 2019 for a Saratoga Town Council meeting.

In March, the Town of Saratoga responded to the novel coronavirus (COVID-19) by closing town hall to appointment only and limiting meetings of the Saratoga Town Council to 10 people or less. While government business has been exempt from the health orders issued by Governor Mark Gordon and State Health Officer Alexia Harrist, local governments throughout Wyoming have still taken precautions.

Since then, meetings of the Saratoga Town Council in March, April and May have been livestreamed by the Saratoga Sun. In May, Gordon amended the health orders limiting gatherings of 10 or less to allow...