A spring start for New BeCLEANings 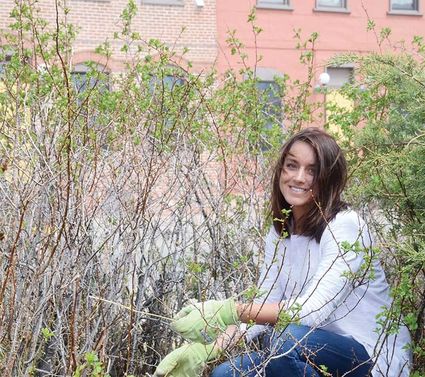 Leanna Jones takes some time out of her busy day to pull a few more weeds from the planter box near ERA Realty on Monday afternoon.

While it may not have been a roaring start to a new initiative to keep the Valley clean, New BeCLEANings had a blooming start for spring on Friday morning as Leanna Jones, CEO for the Saratoga/Platte Valley Chamber of Commerce (S/PVCC), Ray and Jamie Bernal, Roger and Wanda Snell, and Kirsten Teubner set out to begin the deep cleaning of Saratoga.

"At a glance, it did not look like there was an insurmountable amount of cleaning that needed to be done, just a few weeds here and there along with the muck left over from the snow melting away and trash blown by our strong Wyoming winds," said Jones.

According to Jones, she and Wanda Snell began the task of weeding the planter in front of the ERA Realty storefront while Teubner set out to clean the area behind the Hotel Wolf which holds the Little Free Library.

"Gazing across the street from Strong Tower (Designs), this looked like a quick one hour task; pulling a few weeds and edging the bed. We worked for two tireless hours, only to make a small dent in the overgrowth while Ray and Jamie claned the mud and trash from the south side of Bridge Street (Avenue) with quick precision," Jones said. "None of us felt defeated by the seeming lack of progress. We all agreed that even with one weed pulled, a difference has been made."

While also working on beginning to clean up downtown Saratoga, the small group of BeCLEANers were able to experience some inside dining at The Grumpy Italian as the Bernals ordered pizza for the volunteers.

"The new found adjusted normalcy of in-restaurant dining isn't so bad," said Jones. "You're greeted by smiling eyes instead of full faces and service is astounding even though contact is greatly limited as much needed precautions are observed."

While there wasn't a large turnout for the first outing of New BeCLEANings, Jones hopes more people will be inspired to come out and help with continued efforts to clean up downtown Saratoga. Jones wants people to image what just a half hour of work with additional helping hands

"When you drive through Saratoga-as a resident, a visitor or if you are just passing through on the way I-80 or Riverside-the planter alone is eye catching and makes a statement. Imagine, again, if our residents banded together to make a promise to the town to do their gracious and selfless part in picking up trash, pulling a weed or donating flowers to beautify our home," Jones said. "What an impact one person can make. I hope more can join us next time we conquer the main streets of each of our Valley towns."

Jones hopes that, in the next few weeks, there may be enough volunteers to finish cleaning the streets of downtown Saratoga. If enough people are able to help, Jones hopes that Saratoga can be finished before the end of May and focus can be turned to the towns of Encampment and Riverside. Eventually, she hopes that Ryan Park will be reached after more of the snow melts.

According to the Chamber CEO, there is still a decent amount of work to be done. This includes;Removing the rest of the weeds in the planter box by ERA

Clean the park beside Lollypop's

For more information on when and where New BeCLEANings will meet to do cleanup, contact Jones at the S/PVCC by calling 307-326-8855 or email [email protected].