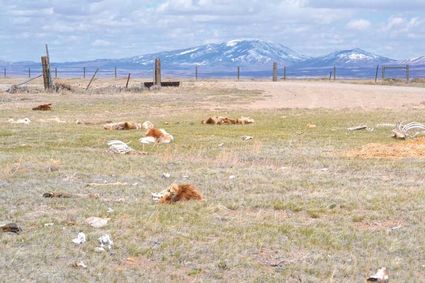 Animal carcasses are illegally disposed of next to County Road 385.

The weather was beautiful and what should have been a pleasant drive down County Road 385 was marred by a grotesque sight this past weekend. Approximately two miles outside of Saratoga, the remains of a dozen or so animals including, elk, deer, antelope and two black and white dogs were spotted.

It appears that people have been dumping animal carcasses on the Bureau of Land Management (BLM) public lands for at least a few months. Some of the animals appear to have been processed after hunting.

Disposing of animal remains on public lands is illegal. If caught illegally dumping a dead animal...