Keeping company with the wolves 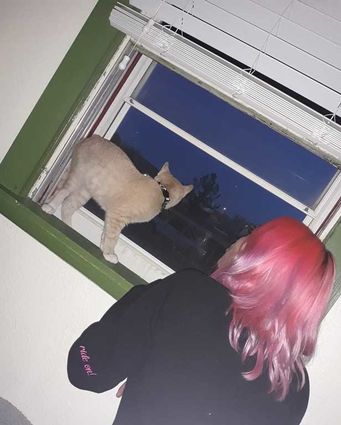 Ciji Goodman and friend get ready to howl at the moon.

The Canadian poet Atticus once wrote "We are never alone, We are all wolves, Howling at the same moon." In recent weeks, that simple piece of poetry has taken on a very literal meaning as the streets of Saratoga have been filled with the sounds of howls at the same time every night.

Saratoga is not alone in this phenomenon. Throughout Wyoming and throughout the United States, communities are seeing residents go outside and howl at 8 p.m. on a nightly basis. It seems to originate from a Facebook group named "Go Outside and Howl at 8 p.m." which was started on March 27 and has 498,027 members.

Ciji Goodman, a 20-year-old Saratoga resident, is one of those members.

"I got an invite from someone I don't even know on Facebook to the page and I was like, 'This is really cool,' so I joined it and, the first night, I was just howling and heard people howling back and I just thought it was the coolest thing ever," said Goodman.

It's not just younger people in the area who are howling, though. Many older residents are also taking part.

"I found about it the 28th (of March) and was amazed at the idea, so I howled," said Saratoga resident Lynda Healey. "I heard no one else, so I started texting and inviting Facebook friends to like the "Go Outside and Howl at 8 p.m." page. That was a slow take off, so I started texting my close friends in my age group. When they started howling, they started getting their kids and friends involved and it grew."

The reasons for howling are as varied as the people participating. Some posts in the Facebook group suggest that it may have started as a way to show respect for healthcare workers working against the novel coronavirus. Since then, however, there have been posts asking people to howl due to the loss of a loved one, a medical diagnosis or more.

"I send up howls for the sick, struggling medical workers of all fields. For the essential workers that literally risk their lives for us and of course for thanks for the gift of the family of howlers right here in the Valley," said Healey. "It is up to the individual howler to decide their way. I howl just to howl as well."

"I've been staying in a lot since this whole thing happened and I know a lot of other people have been staying in," said Goodman. "I do it just to show we're all out here. If you need something you can come over. I don't really have a specific reason. It's just to let people know you're here for them."

The sense of community in a time when social distancing is suggested in Wyoming, and enforced in other states, comes through with the howling for participants. Despite the distance people are being made to put between each other, finding another way to connect has become important.

"It absolutely warms my heart to do something that everyone can do. The audible answer to your quarantine howl connects us, in a way," said Jennifer Johnson. "People are answering each other and it just seems to pull us together. I think it also reaches into a truly wild part of our animal DNA and reminds us how we used to communicate eons ago."

Though having started out slow at first, the howls across Saratoga are beginning to increase as others begin to get involved.

"I was over by Pastor Gene's (Smith) church (Platte Valley Christian Center) and, from the first night, it's gotten way louder. It's like a group of people now and in all directions from me," Goodman said. "I think that people down by the Hot Pool should participate more, honestly. I was down at my mom's ... and we were howling away and there was no one else. I could hear no one."

The howling doesn't last all night, only for two minutes. In some areas, there may be a lone howler while there are multiple in other areas. For those listening and wondering whether they should take part, Goodman and others encourage people to join.

"The wildness of it provides a release, an audible 'spitting in the face' of adversity, if you will," Johnson said.

"Join along with us. It's fun. Let everyone know that you're out there, too," said Goodman. "We're all together, even though we're being quarantined."

In her book "Burning Boats: The Collected Short Stories", English novelist Angela Carter wrote "Those are the voices of my brothers, darling; I love the company of wolves."

It would seem, for the time being, so do many others.