Ryley Alameda learns the ins and outs of raising goats 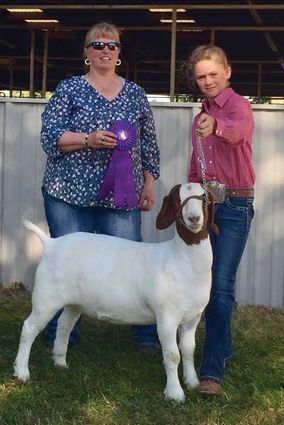 Valerie Remick, left, and Ryley Alameda pose with one of the Remick Boer Goats.

Ryley Alameda is only 12 years old but she is already a partner in Remick Boer Goats, learning the ins and outs of what it really takes to raise an animal for profit. Ryley is a member of the Saratoga's Finest 4-H club and she has shown goats as her 4-H project for the past four years. It all started when a family friend, Valerie Remick, gave Ryley and her brother two bum goat kids from her Boer herd. They named the goats Tank and Lightning and didn't have high hopes for them. However, both goats grew up strong and healthy and Lightning ended up winning Grand Champion Meat Goat at the Carbon County Fair for Rowdy. From then on Ryley was hooked!

Every year, Ryley buys one or two wethers from Remick Boer Goats and then leases does that she will show all year. She and Remick attend sales together and Remick coaches Ryley on what to look for. Sometimes they buy a doe in partnership to add to the herd. At the sales where they sell goats, it is Ryley's job to show each goat to potential customers and in the sale ring. "We try to always leave them with a local friend the night before [a sale], so they are calmer after traveling. Then, before the sale, I give them scratches and calm them down some more."

Her partnership with Remick has introduced Ryley to knowledgeable people in the industry. It has also allowed her to learn more about the Boer goat breed and spot genetic variety, which is teaching her what makes a great breeding goat and what makes a good meat goat. But there's more to goats than just picking them out; you also have to know how to raise them and show them.

Ryley says the most important thing in raising goats is to keep them healthy.

"Last year, one of my goats was a bad eater. He wouldn't eat anything and he wasn't gaining any weight. Then Valerie and I studied many [goat] diets and we found a better feed. He started eating it like crazy, won county fair, got reserve at Wyoming State Fair and placed second in his class at the Arizona National," said Ryley.

Ryley tries to attend as many jackpots and junior livestock shows with her Remick Boer Goats as she can. She hopes to show at the Nile, the Arizona National, The Denver Stockshow and other jackpots in the coming years.

Halter breaking her goats has been Ryley's biggest challenge. Goats can certainly have a mind of their own sometimes. One of her goats had this trick of jumping up in the air, spinning around, and then falling on her side. At one show, this particular goat chose to show off her "trick" right as she and Ryley were exiting the show ring and the goat fell on the gate. "Everyone was like 'Oh no! Is she ok?' I just said "She's alright, she's just crazy!' We still got second place."

Ryley has shown horses, steers, rabbits and sheep in 4-H but goats are her favorite.

"My reserve champion goat last year would come when I called and go on jogs with me. One of my goats has even learned how to sit," Ryley said