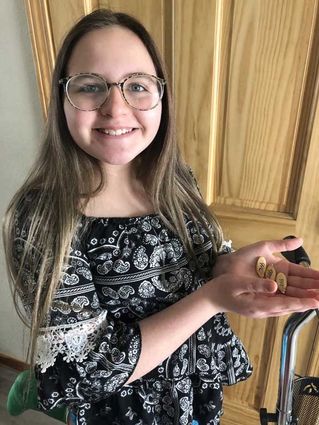 Have you ever wondered what it would be like to ride in a pumpkin carriage like Cinderella?

Well, three Carbon County 4-H members are one step closer to finding out; they are growing giant pumpkins for their 4-H project. One of those 4-Hers is Emily Donough, a three year member of the Rawlins Reliables 4-H Club.

Gardening & Horticulture is her main 4-H project and she got her love of growing things from her mom, Melissa Donough, the biology teacher at Rawlins High School.

"I've always loved planting things and I started thinking this was something I could get better at and then my mom said you can do [gardening] in 4-H." Last year Emily built an aquaponics system with her mom's help and grew tomatoes and peppers that she used when making tacos!

"I've never grown a pumpkin before," said Emily, "but it's my goal to start early this year then I'll [transplant] it in our yard and watch it so the dogs don't get to it." Emily says that's the biggest challenge with gardening, keeping other things from destroying your crop, including her younger siblings.

"I have to make sure they [her siblings] don't pick the flowers or vegetables before they're ready!"

There will be lots of trials as she cultivates her giant pumpkin project, but Emily is ready for the challenge. The giant pumpkin seeds come from a pumpkin in Washakie County named "Keira" that weighed 922 pounds.

"They [the 4-H members] are starting with seeds that have good genetics," says Jay Richard of Jay's Giants. Kiera was his pumpkin.

Richard started growing pumpkins in 2003 and he took his first giant one to the Wyoming State Championship Weigh-Off in 2012. Now, he works with other giant pumpkin cultivators across the state to produce pumpkins that hover around one thousand pounds! Once they are harvested and cut up, Mr. Richard gives his pumpkin seeds away to anyone who wants to try growing them. That's how Emily ended up with three seeds from Keira.

Emily will be planting her giant pumpkin seeds in her greenhouse this weekand has plans to transplant the seedlings once temperatures are more consistent. With a little luck and a whole lot of care, we'll be seeing Emily and her giant pumpkin at the Carbon County Fair in August.