A WyOasis in Medicine Bow 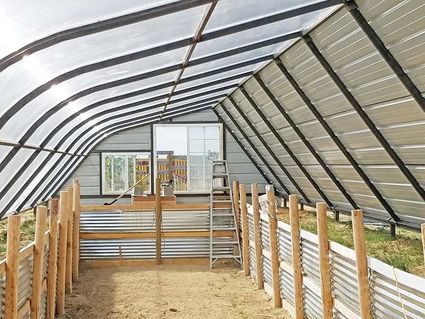 The interior view of the WyOasis green house as it is being constructed.

As unlikely as this might sound, Kani and Lyle Flansburg believe it possible and are taking the steps to make this unlikely scenario a reality.

They have already built a greenhouse in Medicine Bow that is the beginning of this citrus growing world.

For those who don't know what permaculture is, Kani explains.

"Permaculture is the name for a design system that mimics nature to increase soil fertility, thus increasing yield" Kani said. "One of the major elements is called a food forest. This diverse planting scheme imitates the layers of a forest. The top canopy (large trees), the under canopy (small trees), the shrub layer, perennial and annual herbaceous layer, ground cover, vines and roots. Also with permaculture, the idea is to have all the design elements multi-task."

She said that when thinking of permaculture, all facets of nature's ecosystem should be considered.

"For example, fruit trees not only provide food but also blossoms for insect food and shade for the plants underneath," Kani explained. "Caragana (Siberian Pea Shrub) grows well in our climate. Not only do the peas provide food for birds, but it is a great nitrogen fixer, thus increasing the health of the soil and enabling other plants to use that nitrogen."

She said there are real benefits of permaculture for the environment.

"Permaculture design uses polycultures to create ecosystems, not the typical agricultural monocultures," Kani said. "The inter-planting of different plants together that are mutually beneficial are called guilds."

Kani explained the guilds have a component of one main plant anchor.

"Usually, there is the main tree in the center with the layers planted around it. A guild might have various plants that are beneficial to the entire system," Kani said. "Attractors lure pollinators and beneficial insects."

The benefit of pollinators is only one attraction of guilds.

"Nutrient accumulators, deep roots, harvest minerals from the soil and make them available to the plants," Kani pointed out. "Biomass plants have large or abundant leaves to use as mulch around the plants, nitrogen fixers provide nitrogen to the root systems, encouraging mycorrhizae (tiny fungus) which are necessary for good plant growth."

She said the benefits of these plants can make a difference to the environment.

"Some plants provide shelter for birds and other critters, others repel pests through scent or thorns," Kani said. "And some plants, through their dense root systems, keep unwanted "weeds" from being able to encroach into the guild."

She said another feature of permaculture is how water is used.

"Another main tenet of permaculture is water control. Catch the water, slow it, spread it and store it," Kani said. "We are doing this by creating swales (ditches on contour) to soak the water into the ground. Next to the swales is a raised berm which is used for tree and shrub planting. Our idea is to use the swale and berm system to create a Wyoming version of English hedgerows. We have a variety of berry and nut bushes as well as nitrogen fixing trees and shrubs."

The Flansburgs have enjoyed success with their efforts.

"Last year we planted over 600 shrubs and trees and, the year before, 175. Most survived," Kani said. "We have used snow fences to capture snow that would have been scoured off by the wind, installed a drip system to conserve water on the berms, and mulched with straw and wood chips to slow down evaporation and keep the soil moist. If we can mitigate the wind and keep the soil from drying out, mostly anything will grow here."

This is why the Flanburgs believe that they will eventually be growing citrus in their greenhouse. They put a lot of thought into the specifications of the greenhouse.

"Our greenhouse is 16 feet by 72 feet and is built over a four foot deep, 11 foot wide excavation," Kani said. "We are employing geothermal principles to heat and cool the inside using only a blower. We have 13 five inch tubes, 250 feet long, buried 12 feet underground."

The Flansburgs employ a machine to keep the air down on the tubes.

"A blower pushes air down the tubes from one end, and when it reenters at the other end, it is always 55 degrees," Kani explaine. "So in the winter it warms the air and in the summer, it cools the air in the greenhouse. Also, we have a tube along the peak to vent hot air to the outside or under the dirt floor of the greenhouse to warm it."

Having the greenhouse working in this manner, growing citrus trees is a reality.

"In the greenhouse food forest, we'll be using citrus and avocado trees as our canopy layers. Vines will run along the top to help provide shade. We'll be planting nitrogen fixers and nutrient accumulators such as comfrey," Kani said. "We will also have plants, such as strawberries, as ground cover. Along with the perennial plants we'll have the tomato, squash and pepper extravaganza. Eggplant is also in the offing."

Kani said, at this point in the growing of plants in the greenhouse, they are still figuring out what are the best methods and plants to concentrate on.

"For the first few years this will be a grand experiment to see what we can grow, how we can extend the seasons and what will keep through the winter," Kani said. "Other similar greenhouses in the same climatic zone are producing 150 pounds of citrus per tree. If we are able to be this productive, we anticipate adding more greenhouses and possibly employing workers in the future."

Another crop they have had success with is the Autumn Crocus. The stem of the plant produce the spice saffron.

"Saffron is more valuable than gold by ounce," Kani said. "We are going to enjoy some paella (a Spanish rice dish that uses the spice)."

The Flansburgs are actively involved in the Medicine Bow community. Lyle is a town council member and Kani is president of the Lions Club. Before moving to Medicine Bow three years ago, their home was in Saratoga.

They said they got the idea to delve into permaculture in Medicine Bow after watching a video on YouTube from Geoff Lawson titled How to Green the Desert. After watching the video, it is understandable how the Flansburgs got inspired. Lawson has created oasis' in deserts throughout the world.

The Flansburgs put their greenhouse together with a partial kit from Russ Finch in Alliance, Nebraska and improvised with other parts. They acknowledged a few minor mishaps as the building was constructed but, in general, nothing seriously bad happened. They did lose their bulldozer to snow drifts this winter but they got it out and all is well. 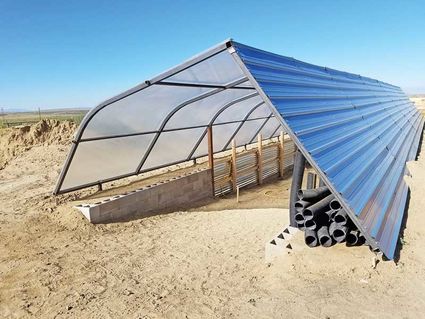 An exterior view of the greenhouse.

Kani has a certification in permaculture design and she and Lyle have been forthcoming with information and help on building a greenhouse on the website permies.com. The greenhouse's construction is chronicled on the website through a series of pictures and blogs starting back about 11 months ago. To find the Flansburgs' history of the greenhouse's creation, go to the website and search for WyOasis (in the snow) Greenhouse Build.

The Flanburgs' are excited by what they have created and what it could mean for the future.

One exciting aspect of permaculture is that it is adaptable to any size yard. Whether you have a small urban plot, or a ranch, it is feasible," Kani said. "It is just a matter of scale. Some of the most successful are in backyards, because the plant density is so great. Also, once it gets going, it is very low maintenance."

If the Flansburgs realize their dream, it is just a matter of time before Medicine Bow will be the citrus capital of Wyoming.