By Contributed by Dick Perue

You've got the 'flu' boy

Soldier in 1918 describes his experience with Spanish Influenza 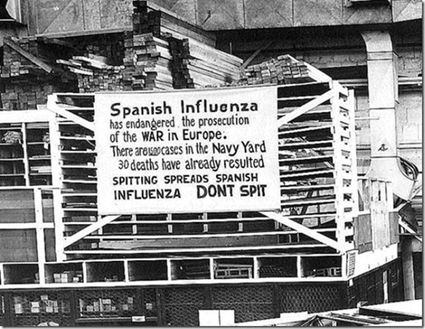 Photo provided by the U.S. Naval History and Heritage Command

A sign at a Naval yard in Philidelphia advises workers not to spit to limit the spread of Spanish Influenza.

As history repeats itself, I thought this article in the December 12, 1918 issue of the Saratoga Sun is worth passing along. The article reads:

"You certainly won't want to contract the flu after reading the following description of the effects of the disease, written by a soldier in training at Camp McArthur, Texas. This is probably the most vivid and realistic description ever written of what one experiences while in the throes of the Spanish influenza. After recovering from an attack of the malady, the soldier was inspired to write the following:

When your back is broke and yo...