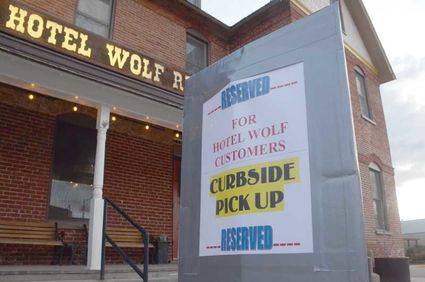 The Historic Hotel Wolf Restaurant was one of a handful of restaurants to close dine-in services before Governor Mark Gordon's orders on March 20.

On Thursday afternoon, a joint order from Governor Mark Gordon and State Health Officer Alexia Harrist directed restaurants, bars and other public spaces in Wyoming to close their doors. In the case of restaurants, they could still offer curbside, carry-out or delivery services while bars could offer drive-thru services or window services.

Just days before that order, some restaurants in the Valley were already making that decision on their own. In Saratoga, The Grumpy Italian and Bella's Bistro (Bella's) both announced their suspension of dining service with the offer of curbside and delivery early in the week.

"Coming to the realization that we were eventually going to have to stop dining service and deciding if we were going to do it before we were required to do so legally or just do it on our own was the toughest decision we had to make," said Cassie Orduno, co-owner of Bella's. "We had to weigh the safety of our employees, our family, against, 'Will this impact our business in a really negative way.' So, that was very stressful for Tommy and I for a long time and, ultimately, we decided it was in the best interest of the community to go ahead and close the dining room and switch our operations over to the curbside pick-up and delivery."

According to Steve Deorio, owner of The Grumpy Italian, half of his business had been delivery or carry-out already. While he did see some slump in sales, it wasn't nearly as severe as he had thought it might be following the decision to close the dining room.

"We are still getting take-outs, the town's still supporting the Valley eateries," said Deorio. "I try to look at the positive of everything and, one way or another no matter how much the virus is going through, I'm going to be down here making pizzas. Simple as that."

Another Saratoga business, Firewater Public House (Firewater), eventually made the decision to close the dine-in services just a few days before the order from the State.

"Really, it came down to a pretty personal level of which one would I be able to live with longer in my life," said Danny Burau, owner of Firewater. "It was a matter of, could I deal with potentially making a decision that would have led to a potential loss of life down the road in the worst case scenario or just not being able to pay my servers as much now. When I finally framed it that way in my mind, it was the only decision. It honestly helped. I slept better that night having made the decision."

Burau added that, following the order from Gordon, it further affirmed in his mind that he had made the right decision. What also helped was seeing other businesses in the Valley make that decision on their own as well.

"Seeing what others that I know and respect in the area are doing helped me recognize the right decision as well," Burau said.

Other restaurants in the Valley, however, went up to the very day of the order. Such was the case with the Bear Trap Cafe and Bar (Bear Trap) in Riverside and Sweet Marie's Bakeshop (Sweet Marie's) in Saratoga. The owners of both establishments quickly adapted to the changing situation in an attempt to keep business going.

"It's one of those situations where you have to adapt or you're done. So, we're playing around with some things," said Margaret Weber, owner of the Bear Trap.

Marie Christen, owner of Sweet Marie's, developed a new website for her business in under 24 hours while Weber created a menu based around items that customers could take home and bake for themselves.

"Just looking online and seeing what this has prompted business owners to do. It's been pretty impressive. I saw that Marie built a website and Margaret's rolled out an entire family take and make/bake menu," Orduno said. "Hard times really allow people to shine, I think."

"We're inventing a lot of stuff right now. All the businesses around here, the bars and restaurants, in how you do business and how you communicate to people," Burau said.

That restructuring hasn't come easy, such as in the case of Bella's.

"Making the transition from a full-scale, sit down, fine dining service to a curbside pickup and delivery has been a lot bigger change than you think it would be and than we expected," Orduno said. "It involved a complete overhaul of our ordering system in the computer, it was full training for everybody and we're still kind of learning it as we go."

Firewater had to rethink their breakfast menu, which had been designed around a dine-in experience. That meant going to something that was easy for people to carry or eat on the go such as breakfast burritos or breakfast sandwiches.

"In a time like this, when you need more people to spend smaller amounts, it's an easier model right now to make money than to have a full sit-down experience. You've got to find ways to be more efficient whether it's ingredients, be more efficient with cost because we still have the usual overhead and I've got some people working," said Burau. "It's a different kind of trading game of how much volume can you move at a lower price versus a more sustained experience and a little higher price point."

As these changes have been taking place, it appears that the people in the Valley have been more than supportive. On Saturday, Weber had 24 orders for take and bake fajitas and, on Sunday, she had sold out with 40 take and bake tuscan chicken dishes. Orduno has seen people take advantage of the curbside delivery and Burau had customers arriving at Firewater on Saturday morning to grab the new breakfast items.

While that support is certainly overwhelming for the Valley restaurants, the uncertainty still weighs on them. Despite the date given by the State of Wyoming, April 3, many feel that the closures will likely last longer. 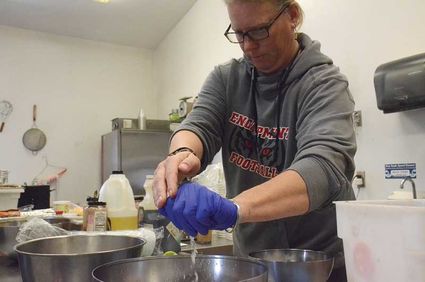 Margaret Weber, owner of the Bear Trap Cafe and Bar, works on one of her new take and bake dishes Saturday afternoon.

"If it does not get any better by April 3, my decision probably will be to shut down all together. If it gets that bad, I would rather have my family at home than down here," said Deorio. "So, let's hope it doesn't get that bad."

"I really think the most unnerving part about the whole situation is, they're picking dates but it feels arbitrary," Burau said. "That date doesn't mean anything to me so the lack of clarity is the most stressful part."

"It is arbitrary because it will get extended. It was a shot at a dart board is basically what it was and because nobody knows how far this is going to reach and how devastating it will be on people. You can't give any certainty," said Weber. "You can't say, 'Oh yes, April 3 at noon you can be open.' It doesn't work that way. It would be nice if it did."

In the meantime, the necessity of the situation is leading the Valley restaurants to try and find new ways to serve their customers in a new kind of normal.