By Douglass and Anthony Campbell 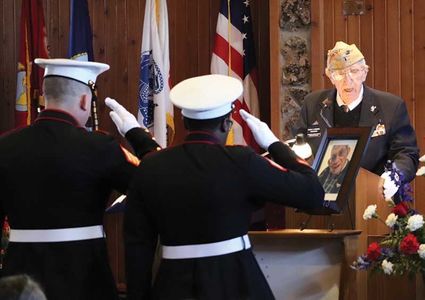 Editor's Note: Encampment VFW members Jason and D'Ron Campbell recently took their sons, Douglass and Anthony, to the funeral of Corporal Remigo "Ray" Barela in Casper. Barela, who passed away at the age of 101, believed he had no family at the time of his death. The Saratoga Sun afforded Douglass and Anthony the opportunity to reflect on the experience.

On Tuesday, February 28, my little brother and I went to the funeral for Cpl. Remigo "Ray" Barela. He was a WWII Marine Corps Veteran who served from 1942-1946. He had no known family but he would always tell his friends that he had "outli...