Carbon Invite cut in half 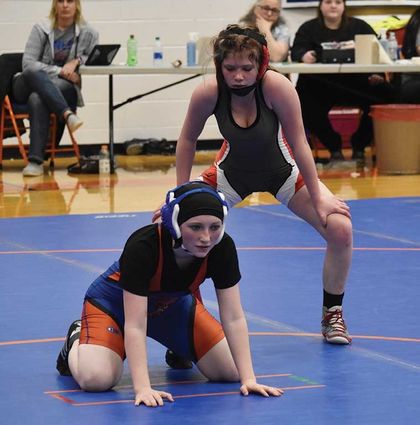 Miner Charlee Solaas, on the ground, gets ready to take on her opponent at the Carbon Invite on Friday at HEM.

Twenty schools were intending to come to the Carbon Tournament on February 14-15 at Hanna, Elk Mountain, Medicine Bow (HEM) High School. Due to the blustery wind and icy road conditions, three schools dropped out.

The wrestling event started at 1 p.m. and the gymnasium where the teams were staging their matches was packed with parents and friends from all the schools attending.

HEM, Saratoga and Rawlins were the Carbon County teams that showed up.

From HEM, Charlee Solaas at 126 gave the hometown fans a wrestling match that pitted her against another female wrestler. Although she did not wi...