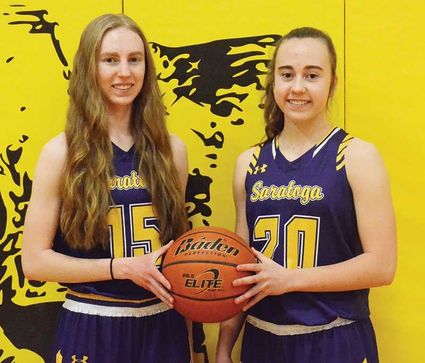 Taylor Bennett, left, and Whitney Bennett scored a combined 50 points towards the total 82 points that broke the previous school record of most points scored in a single game.

In the multipurpose room of Saratoga Middle High School, names and records adorn the walls as they tell the story of achievements by student athletes through the years. Some of these records seem to stand the test of time as decades pass before they're broken. Other records are shattered on an annual basis, and sometimes by the same people who set them the year before.

On the night of February 4, the Saratoga Lady Panthers broke one of those long standing records as they hosted the North Park Lady Wildcats. While it was a team effort, the Panther's share of the points came from two sister...