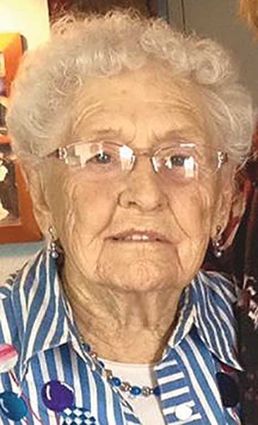 Betty Everist Vyvey was born to Clyde and Jessie Everist in a homestead cabin outside Thatcher, Colorado on December 17, 1921. She and her mother were all alone that day as her dad and sisters had gone to get a midwife.

The family lived there, and in the surrounding areas, until she was ready for high school. There was not a high school close, so Betty's father moved his family to Saratoga, Wyoming where he would go into the grocery business with his brother, George Everist. Upon entering High School in 1936 at Platte Valley High School, Betty and her sister Phyllis became freshmen together and her sister Peggy started as a junior.

Shortly after her graduation in 1940 from Platte Valley High School, where all three of her children would eventually graduate, Betty married Rene' Vyvey, a son of a Beaver Creek pioneer family, on January 1, 1941.

She met Rene' while working as a soda jerk at the Donelan Pharmacy. One of her first homes was a sheep wagon where, that summer, she and her husband lived and she learned to cook for ten men every day. Betty went on to become one of the finest cooks in the country. Most of her life was spent cooking meals for hired men. Her philosophy was that there could never be too many gathered around her dinner table as another bean could always be thrown in the pot.

Betty became the picture of the ranching wife doing all the duties of an extra hand. She rode horseback to work cattle or just for pleasure; helped brand calves; pulled beaver dams; fixed fence, head gates, hay cribs and the like; helped to feed livestock and pull calves in the winter.

Most of all she enjoyed running her sweep each summer in the hayfield while she kept her hand in the kitchen cooking for the hay crew. It was not unusual to find a calf on her living room carpet in front of the stove as she fought to save its life by teaching it to drink and giving it medication. She remembered a time when a calf was put into the back seat of their brand new car then driven across the river to find its mother. She cringed but then remembered who had helped pay for that car.

She was a first rate cook, carpenter, electrician, plumber and gardener. If it needed fixed, Betty generally could figure out a way. Years ago, an installer from the phone company was shocked to find out that she had hard wired a phone in by herself. Obviously, this was long before the new day and age of the do-it-yourself phone installation manuals.

Betty was room mother for all three of her children, FHA Chapter Mother and generally, when her kids were going through school, she was always volunteered by kids other than her own to chaperon because she was so much fun to have along. She drove the school bus for years.

She joined Saratoga Homemakers in 1951 serving as president and various other offices and also was Carbon County Homemaker Council secretary for two years. She was dedicated for years to the Saratoga booth at the Carbon County Fair and helped compete for the winning booth honors.

Betty was very active in the several Masonic organizations. She joined the Order of the Eastern Star in 1949 serving as Worthy in 1958 and again thirty years later she served twice in that capacity. She was a past president of the Past Matron's Club, the Grand Representative from Wyoming to Kansas and Grand Warder to the Wyoming Grand Chapter. One of her proudest awards was to receive her 70 year membership pin last year. She worked with the International Order of Job's Daughters since 1955 serving as Bethel Guardian and various other council offices. Her efforts prompted her two daughters and four granddaughters to become Past Honored Queens and a daughter to serve as Bethel Guardian. She was so excited to accompany her granddaughter, who was Miss Colorado Job's Daughter, when she competed at Supreme Bethel for Miss International Job's Daughter. One of her biggest thrills was when her grandson became a Master Mason plus when her two daughters and four granddaughters became members of the Order of Eastern Star.

Betty joined the Snowy Range Cowbelles in 1963. She was president and had held numerous offices nearly every year and served on the Carbon County Rodeo Queen's contest committee for many years. She was very active in the promotion of beef and beef products in Wyoming. She was selected 1988 Snowy Range Ranch Woman of the Year.

Betty and Rene' made their home on a number of ranches on Elk Hollow, Jack, Pass, Cedar and Spring Creeks. They made their final home on South Spring Creek for over 30 years. One of Betty's memories of Cedar Creek was that her garden held first water rights on the creek and obviously was a matter of great controversy and laughter between she and Rene'.

Betty handled a number of misfortunes in her life with the same positive thinking that had always guided her life by putting things into God's hands and accepting His will. She contacted polio when the epidemic hit the Valley. She had a slow agonizing recovery getting back eventually into the everyday life of a rancher's wife with two small children. She and her five year old son received second and third degree burns when a propane brooder house exploded. She suffered a skull fracture when she was hit on top of her head by a horse. She worked the whole summer in the hay field, cooked for hay hands, relatives and friends who had stopped in to visit that year. It wasn't until months later that a doctor told her how serious the injury had been.

When she lived in Saratoga one year between ranches, Betty sold Avon products and received many awards for being the top salesperson. She always contributed to the family coffers by selling eggs, cream, milk, cottage cheese and receiving allowances for cooking for hired men.

Betty had three children; Dixie, Ray and Tammy; 10 grandchildren and 13 great-grandchildren. She had friends from all over the world. Betty was once in the Carbon County hospital when her roommate was bemoaning the fact that she had a foreign student arriving the next day for the summer and she was about to undergo surgery. Without batting an eye, Betty offered to pick up the student and take her home for the summer. Not only did that relationship with the visitor from Japan go well but the young lady sent her cousin the following summer to stay with the Vyveys.

Betty loved cooking and finding recipes and helped organizations incorporate them into cookbooks. She was well known for her chokecherry syrup, lime pickles, lemon meringue pie, rolls, Belgium cookies, fudge, Swedish Tea Ring, Brownies in the Waffle Iron and numerous other treats. She loved to dance with Rene', crochet, knit, crewel embroidery, crafts, read, play bridge and photography. Her favorite thing was to fix fence with Ray. She spent winters in Georgia and Florida for a number of years with her daughter and five grandchildren, being very active in their activities and did the video tape for all their events.

Her later years living in Saratoga she enjoyed lunching with friends at the Senior Center and getting caught up of events in Saratoga. She especially loved getting to know her bus drivers. She always had a story.

She helped raised many extra children over the years and still heard from most of them and would unexpectedly find one on her doorstep for a visit. Her door was always open and there was always a place to stay and a warm meal.

Betty died January 31,2020 at her home in her beloved Saratoga.

When asked how she would like to be remembered, without hesitation Betty replied, "As a good wife, mother, mother-in-law, grandmother, aunt and friend."

Her proudest accomplishment was surely being a rancher's wife.

A Memorial will be held June 19th in Saratoga.