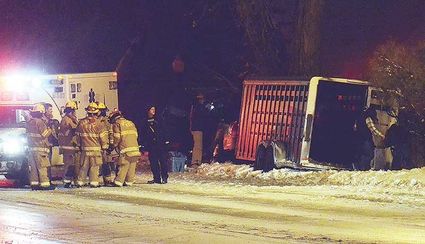 The Saratoga Volunteer Fire Department gathers after having extricated the driver of the Dodge on Friday night.

While there were plenty of slips and crashes over the weekend that are expected to be part of Saratoga Skijoring, one team was unfortunately unable to make it due to a slip and crash of their own. On Friday evening, a team from Colorado was involved in a one vehicle wreck at 1st and Maple in Saratoga.

According to an incident report filed by Officer Kyle Murphy of the Saratoga Police Department, a Dodge 2500 and a gooseneck horse trailer driven by John Sanders of Pagosa Springs, Colorado was heading north down the 1st Street hill when the truck lost traction. After losing traction, both the...