Panthers at No. 2 in 1A Southwest

Dual wins against Cokeville, Farson-Eden put Saratoga near the top 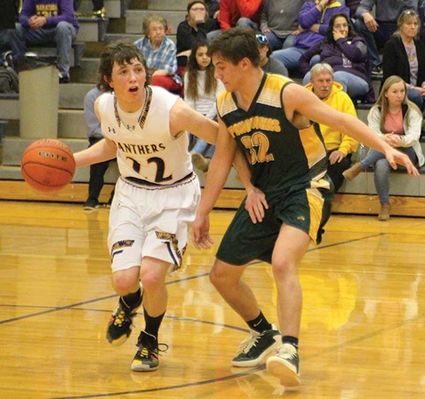 Panther Gavin Bartlett tries to work past a Pronghorn on Saturday.

The Saratoga Panthers are continuing to show they have something to prove as they now sit at No. 2 in the 1A Southwest Conference following this weekend. Saratoga hosted the Cokeville Panthers (6-7, 0-2) on Friday and the Farson-Eden Pronghorns (9-5, 1-2) on Saturday.

"We wanted to key on our post defense, especially against Cokeville, and the boys executed it well. Offensively, the boys pushed the ball well but were also patient when we didn't have the shot we wanted," said Head Coach Jason Williams.

"I thought the Cokeville game was a good game for us," Williams sa...