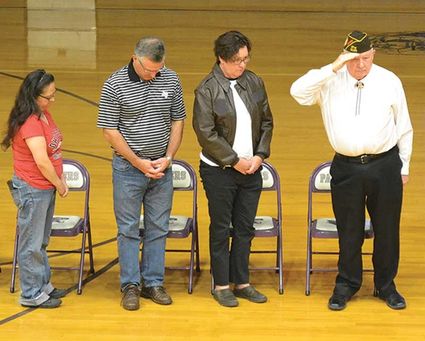 A moment of silence is observed for those who made the ultimate sacrifice.

Assistant Principal Zack Schmidt of Saratoga High School opened the special assembly to honor our Veterans by reminding students why we celebrate Veterans Day. He stated, "Today it is our privilege to say thank you to all American Veterans and let them know we appreciate them for their service, honor and sacrifice. The price of freedom is high, we cannot afford to forget those who are willing to pay. Today we celebrate America's Veterans for keeping this nation the land of the free and the home of the brave."

Four Veterans volunteered to speak with the students to relay what it means to them to be a Veteran and relay some of their sacrifices.

Teense Wilford was the first to speak. He served in the United States Army and was in one of the first outfits to patrol the Berlin Wall in 1962. Teense recalled people being trapped when the wall went up, "People went to work in the morning and couldn't come home to their families in the afternoon. There were a lot of them. The wall closed off buildings and people would get up on the roof and jump off. Their family would try catching them with sheets and they missed the sheets when we would patrol."

He also recalled another international incident where a young man ran through a clearing to climb the wall, "They were shooting at him and he lay in front of us. We couldn't rescue him because, when we went out, they started shooting at us. He lay there for 45 minutes and passed away. We couldn't help him. Things like that linger in your mind forever."

Teense asked the assembly to remember that we are free today, "Because of Veterans and those who have sacrificed their lives." He also stated, "Their families have made great sacrifices, too. Living without their fathers and mothers for a number of years. Teense askes everyone to "please remember Veterans Day and all Veterans."

D'Ron Campbell shared her experience as the only female pilot on the base where she served. She said, at that time, women were not allowed to fly fighters. D'Ron flew AWACS, a modified Boeing 707 aircraft, which is used in surveillance. She said, "I did a lot of things with the AWAKS, flew in Japan, Thailand, Australia and South America looking for drug runners".

After that she became an instructor with about 3,000 hours flying in the Air Force.

D'Ron said one of the hardest things she faced was an incident when she was stationed in Alaska. She stated that her squadron was about the size of the group that was assembled, "One of our aircraft took off and we lost a quarter of our squadron in less than a minute flying in a flock of geese. So like all of you (motioning to the students)....gone."

D'Ron stated that "some of the people lost a lot of things, friends and family" and asked the students to remember that it is important on Veterans Day to thank those who have given the ultimate sacrifice.

Jason Campbell thanked everyone who came to the assembly. He stated that he had awoken that morning to a text from a friend thanking him for his service, "My response is always this; it was our privilege to do it". Jason served a total of 24 years. He was stationed in Afghanistan with the Wyoming National Guard which was his "least enjoyable tour".

Jason relayed an experience he had while flying a C130 out of Canada on his way to Europe. It was Veteran's Day but in Canada it is known as "Remembrance Day". He was heading to breakfast and the town's people were heading toward the town square, "I was wondering what is going on, so I just followed along. It was at St. John, the whole town was gathered at their war memorial and they were there all day long doing speeches, bands were playing and so this is a little bit of a taste of that. It really means a lot to have you guys come and remember because this is a day of remembrance".

He also reminded everyone that this date was once known as Armistice Day but it was changed to Veterans Day in 1954.

Season Shumaker was the last to speak. Season enlisted as a cook and served for six years. She said that she was very lucky to have never been in combat, but she said that there wasn't a day when she wasn't on a ship. Season served on four different ships, two destroyer tender and two supply tenders. Of the ships, Season said they were "very big ships and I have seen missiles bigger than, well, they are just huge, massive and there are just stacks and stacks as long as the ships are long".

Season recalled the difficulties of first enlisting. "I was very close to my Mom. It was the longest time I had ever been away from my Mom. I remember the first time I got on the phone, it was just a cry fest." 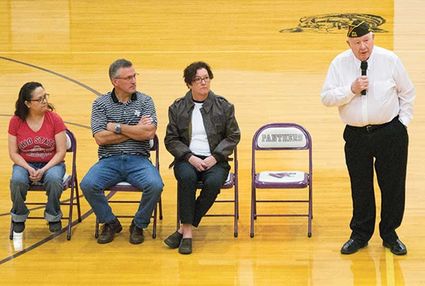 She let the students assembled know that it did get better and, after a while, she was excited to relay her experiences to her Mom. Season ended by saying that it was a great experience.

Schmidt asked the students to also recognize staff member Frank Everman who served in the Marine Corps in Vietnam as he was not able to be at the assembly.

While Veterans Day is a celebration of living Veterans, a moment of silence and respect was observed with the playing of Taps to pay tribute to those who gave their lives for their country. Taps is historically significant as it was played to sound the cease fire and end of hostilities when the WW1 armistice was signed in a railway coach near Le Francport in France November 11, 1918.

The assembly ended and all of the students lined up to shake the hands of our local heroes, thanking them for all they have done.