Not the same team 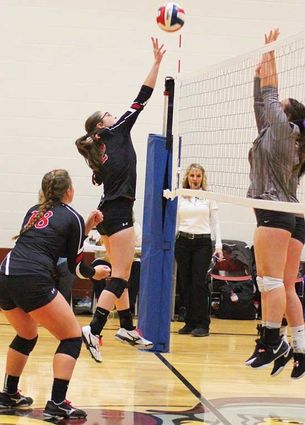 Peyton Munroe goes up for a return during the consolation semi-final match against the Lady Rattlers.

While the Encampment Lady Tigers struggled with losses throughout the regular season, they ended it by advancing to the consolation semifinals during the 1A West Regional tournament over the weekend. A win across three sets against the Farson-Eden Lady Pronghorns (25-17, 25-17, 25-18) last Monday secured Encampment's place in the tournament.

"It was quite an exciting week for sure," said Robin Brown, head coach of the Lady Tigers.

"We have played Farson several times this year, so we know what to expect and we knew we would need to stay focused and be ready for any ball to come back to us," Brown said. "Going in, I knew it would be a game of mental focus and whichever team could stay in control would win the game."

"The girls came out and played with focus and played with heart. I was proud of how well they played as a team. It was great to see them have fun and be successful," said Brown.

Following their win against Farson-Eden, the Lady Tigers had to face No. 1 Northwest ranked Meeteetse (20-6-3, 8-0). While Encampment would bring it close, within 6 points during the second set, the Lady Longhorns would ultimately send the Lady Tigers to the consolation bracket.

Determined not to get all the way to the regional tournament and head home in two games, Encampment brought a fight to the No. 3 Northwest ranked Lady Rams (3-16-1, 3-5). Dubois had been sent to the consolation bracket following a loss to the Saratoga Lady Panthers earlier that day. They would also be given a loss and sent home by Encampment as the Lady Tigers defeated them in three sets.

Following the win against Dubois, the Lady Tigers went on to face No. 3 Southwest ranked LSRV (22-11-1, 4-4) on Saturday morning. The Lady Rattlers had won against Encampment twice during the regular season with the game in October going across five sets. In the tournament, LSRV won in three and sent the Lady Tigers home with their second loss of the weekend.

"This weekend we had some tough matches at regionals," said Brown. "We had a few bumps along the way and the end result wasn't what we were hoping for. However, we did a lot of good things, too. The girls showed how much they grew with their fundamentals, team play and mental toughness. They fought hard and left it all out on the court at the end."

Brown said that, looking back on the season, she is "incredibly proud" of the growth that the Lady Tigers have had over the season.

"They came into practice every single day and worked hard to improve, which they did," Brown said. "We are not the same team we were in August. The girls were willing to accept criticism and work to improve in every part of the game. They consistently put the needs of the team before their own desires.

The Lady Tigers' head coach looks forward to next year as they will not be losing any seniors and will have at least all nine players returning to the court.

"This is a great group of girls with an excellent work ethic and even better enthusiasm for volleyball and for the Tiger team," said Brown. "It will be an exciting year."