The Nitty Gritty Dirt Band played to a sold out audience at the PVCC on Aug. 29

The Valley had the Nitty Gritty Dirt Band return to the Platte Valley Community Center (PVCC) on Aug 29 to a sold out auditorium. The band was established in 1966 in Long Beach, which translated into fans of all ages.

The six man band, formed back in the 60s, has two founding members still entertaining audiences. Frontman Jeff Hanna, who plays guitar and vocals for many of the group's songs, and Jimmie Fadden, drummer, singer and harmonica player, have been with the group since day one.

When the audience broke out into cheers, Hanna told the crowd at the PVCC the band was glad to be playing in Saratoga. The band has come to Saratoga before and played at the PVCC seven years before.

"We are mighty happy to be playing for you in beautiful Saratoga, Wyoming," Hanna said. "What a great place to hang out for the day."

Over the 53 years of the band's existence, besides Hanna and Fadden, there are 20 other musicians that have played with this legendary band.

Singer songwriter Jackson Browne started with the band in 1966, but left after a few months to pursue a solo career.

The band played folk-rock that was popular during the late 60's and had a top forty hit in 1967 with the song "Buy for Me the Rain" off their debut album "The Nitty Gritty Dirt Band." The band went from a band that had jugs and washboards, in addition to guitars and harmonicas, to having drums and using electric instruments in 1968.

The group put out a few albums before hitting gold in their 1970 album "Uncle Charlie and his Dog Teddy". The album was a traditional country and bluegrass sound, which included the group's best known single, a cover version of "Mr. Bojangles". The song stayed on the pop charts for 36 weeks. The album also included the first recorded songs written by musician Kenny Loggins.

The band had a similar sound in their next album in "All the Good Times". Their 7th album, "Will the Circle be Unbroken", brought in bluegrass and country-western musicians from the 40's, 50's and 60's. It was an unqualified masterpiece to listeners who revere the legends that contributed to this album and was nominated for two grammy awards.

"This record was a pretty big deal," Hanna said. "It is in the Library of Congress. It is in the Grammy Hall of Fame."

The band played a song from the album, written by Hank Williams, called "Honky Tonk".

Hanna continued his history lesson to the audience.

Hanna made mention of how many musicians had been in the band since its inception by talking about marriage.

"Summertime is a good time for a wedding," Hanna started. "Somebody is probably getting married tonight and celebrating at the hot springs. Our band knows a lot about weddings; you got six guys up here right now that, if you added up our marriages, it would be 38 times. Think about that and all that have played with us over the years. Us musicians, we will do anything for love."

Hanna put the spotlight on Bob Carpenter, who sings, plays the keyboards, accordion and guitar. He joined the band in 1980 and the Valley audience saw he was still playing with the band after almost 40 years.

The other members of the band were introduced after Carpenter.

"This is my son, folks," Hanna shouted.

Father and son sang the next musical number together. It was a successful number judging by the loud applause of the crowd.

After the song, Hanna gave a little more history of the band.

Hanna told the audience after being the "Dirt Band" for a few years, the band changed their name back to "Nitty Gritty Dirt Band" in 1982, but not before the group appeared on Saturday Night Live. Under the name, "The Toot Uncommons," the band provided backing for Steve Martin on his million selling recording, "King Tut" in 1978. They performed with Martin live on the television show.

When the group returned to the name "Nitty Gritty Dirt Band", they also went back to country-western. Over the next several years the group scored three number one country hits, "Long Hard Road", "Modern Day Romance" and "Fishin' in the Dark". The last song, recorded in 1987, became their largest selling hit when in 2014 it became available for download and sold over a million digital copies.

The crowd went wild when this song was played towards the end of the evening, making it obvious how popular it is although it is over 25 years old. Only "Mr. Bojangles" had a stronger response with the Valley crowd.

When introducing "Mr. Bojangles", Hanna made the observation, "This song is the reason we get to get on the tour bus every night."

Hanna had the willing crowd sing along with the band on the refrain of "Mr. Bojangles."

Once finished with their iconic song, Hanna told the crowd the band had a connection to the area.

"Our band lived in the Rocky Mountains in Colorado for a while," Hanna said. "A lot of good material came from then."

In 1989, the band put out "Will the Circle be Unbroken:Volume II". Several of the original stars returned with more famous country-western musicians joining this second recording. The album won two Grammys.

In the 90's the band toured and put out the 25th anniversary concert album and collaborated with the Irish band Cheiftans for the album "Another Country". This album also won a Grammy.

A song from the 30th anniversary album that the band performed was "The Lowlands".

"This song reminds us of what a western song should sound like," Hanna said. "It was written by Earl Scruggs."

There was a song that was written by the Nitty Gritty Dirt Band that got more famous when recorded by another artist.

In 2004, country group Rascal Flatts released a cover of "Bless the Broken Road," which the Nitty Gritty Dirt Band had recorded on "Acoustic" in 1994. Songwriters Jeff Hanna, Marcus Hummon, and Bobby Boyd won a Grammy for Best Country Song for this work in 2005. 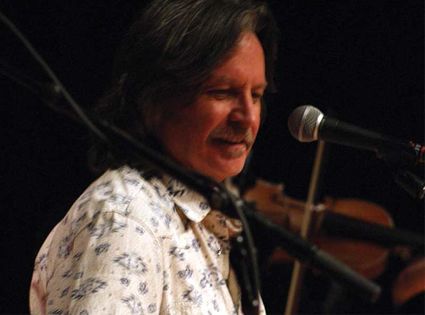 Frontman Jeff Hanna talked to the crowd throughout the concert.

"Rascal Flatts had a giant hit with it, but it is our song," Hanna said. "I am glad they did it. In fact, I thank God every day when I get in my pick up truck. My brand new pick up truck."

Carpenter sang the lead vocals for "Bless the Broken Road".

"The title was appropriate. Our band has been doing this for 50 years," Hanna said, "and we are really proud of that, because we can still walk and talk, chew gum and all that."

From the reaction of the crowd as the night came to a close, it was apparent many in the audience hope the band keeps going for another 50 years.

Since the band has seen many members come and go and frontman Hanna's son is in the band, it is not impossible.