Mark Gutierrez, a 12-year combat vet, is biking across America for Project Hero 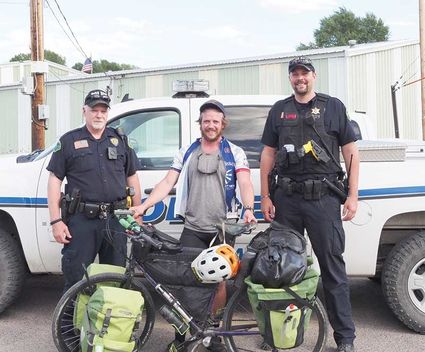 For 12 years, Mark Gutierrez served in Iraq and Afghanistan in the United States Navy Special Operations where he was tasked with explosive ordnance disposal.

"I was defusing and rendering safe improvised explosive devices and other explosive booby traps," said Gutierrez. "I had my bell rung one too many times and I started experiencing black outs. I was sidelined and I went through a medical work-up and I was medically retired for traumatic brain injury (TBI) and post-traumatic stress disorder (PTSD)."

According to a 2017 study published in the Journal of Neuropsychiatry and Clinical Neurosciences, the Defense and Veterans Brain Injury Center reported nearly 35,000 diagnosis of TBI in the United States Military since 2000. The study also stated that TBI was called a "significant injury" of both the Iraq and Afghanistan Conflicts, with 17 percent of post-9/11 military veterans meeting the criteria for TBI while deployed.

Gutierrez spent the final months of his medical work-up at the Walter Reed National Military Medical Center in Bethesda, Md. While there, he met a mechanic who was augmenting bikes for use by amputees returning from Iraq and Afghanistan as part of Project Hero, which had a hub at Walter Reed.

"To get to see something like that and how hard the man worked on it and how much we worked with the wounded warriors to help them get their lives back, I knew that I wanted to participate," Gutierrez said.

The mechanic, named Ray, helped get Gutierrez in contact with Project Hero. That culminated in the retired U.S. Navy veteran embarking on an approximately 5,000 mile bike ride across the United States. Not only does Project Hero aid veterans with TBI and PTSD, but it also aids first responders.

According to Gutierrez, Project Hero utilizes bicycling as a form of recreational therapy for veterans and first responders.

"It usually involves getting guys out on group rides, getting them into more of a regimented 'every week or so we're going to be doing this' and it typically gives them a stronger sense of community. It has shown a lot of good results," said Gutierrez.

Having started in Washington, D.C., Gutierrez came through Saratoga on Aug. 13 and met with Saratoga Police Chief Ken Lehr and Seargent Tyler Christen.

"I've been focusing more on the first responders because I feel like they're kind of the unsung heroes of our country, especially in small towns like Saratoga," Gutierrez said. "Anytime a police officer shows up, it's like the beginning of somebody's bad day. It's a very thankless job. It can be a very dangerous job, too. So, I like to come in and I like to give my appreciation. I show thanks to the fire fighters, I show thanks to the EMS. That's kind of been my personal touch to this ride, to the fundraiser, is really just wanting to come in and sit down as a 12 year combat vet and let them know I appreciate what they're doing."

Upon coming into Saratoga, Gutierrez had rode just under 3,000 miles and had, by his estimate, another 3,000 miles to go. While the wind has wailayed him at times, his plan is to reach Whitefish, Mont. before beginning his western route and biking along the Pacific Coast Highway down to San Diego, Calif.

"I've done just under 3,000 miles now, but now that winter is coming, I have to be a little more direct," said Gutierrez. "Whenever I started it was definitely week-by-week and sometimes day-by-day, but when I was in Denver I knew that I needed to be a little bit more methodical in my route and then planning my rest days, that way I can avoid any early snow."

To find out more about Project Hero's work, visit www.weareprojecthero.org.