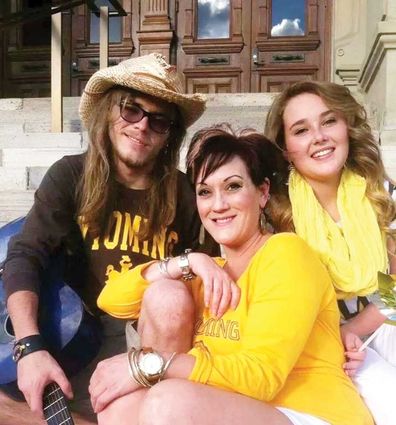 Leigh Rae Brungardt (Hamilton), 45, of Saratoga passed away surrounded by family on Saturday, June 15, 2019 at Wyoming Medical Center in Casper, Wyo. Leigh was born to Richard Hamilton and Carolyn Hamilton (Bottoms) on January, 25, 1974 in San Jose, CA. She grew up in Phoenix, Ariz. Sea Brooke, Texas, Encampment and, later, living life in Cheyenne and Saratoga. She graduated high school in Phoenix, Ariz; later getting her cosmetology license in Cheyenne,Wyo. Leigh loved being a hair stylist and was very honored to work at Old Baldy Club, where she enjoyed everyone she got to work on and with.

Leigh was full of life and very charismatic. She always dressed to impress, loved make-up, fashion, music and trivial historical facts of all kinds. She very much enjoyed anyone that came up to her to play a song; her favorite music was always performed by her son Shiloh. Most of all she loved and devoted her life to her family. She was an amazing mother of two beautiful children Shiloh Blue Hansmeyer and Carolyn (Cara) Mae Pittenger; who she loved the most with all her heart. Leigh married Wesley Brungardt on March, 31st, 2015 and became Mama Leigh to Teagan Brungardt. She was a loving wife and mother to all. On September, 2, 2015 she was blessed with a grandson, Liam Blue Espy, by her daughter Cara Pittenger promoting her to Mimi; once again sharing everything she had with love to her family. Fighting every single day for the ones she loved meant everything to her. Leigh always had her arms spread wide and an open house and heart to anyone. To many she was like a mother, a sister, an aunt, a friend. She will be deeply missed by all, as she touched so many lives.

The family would like to thank everyone that has supported them through the loss of her life. There will be a Celebration of Life held for Leigh at 1 p.m. on Sat. July 13 at Spirit West River Lodge located in Encampment. There has been a memorial account sent up for donations at The Rawlins National Bank on 209 S. 1st St, Saratoga, Wyo., 82331.The account is called the Leigh Rae Brungardt Memorial Fund. Anyone can make a deposit or donations can be mailed to Leigh Rae Brungardt Memorial Fund C/O The Rawlins National Bank P.O. Box 1290 Saratoga, WY 82331. Thank you very much from her husband and her daughter. We love you Leigh Rae, till we meet again. God Bless all.