The Wizard of Oz

SM/HS presents the story of a girl, her dog, a witch and a wizard Sunday 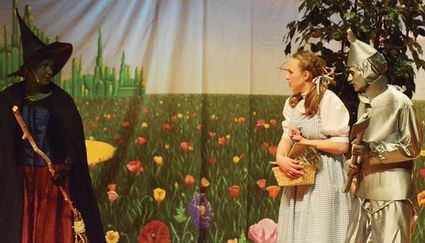 The Wicked Witch of the West confronts Dorothy and her companions.

It can be hard to find someone who isn't familiar with "The Wizard of Oz." The book, written by L. Frank Baum and published in 1900, influenced the 1939 movie starring Judy Garland. On May 12, the Saratoga Middle/High School (SM/HS) Drama Club presented their own rendition of the famed children's novel. Despite it being 119 years (almost to the day) since the book was published, the Saratoga Sun will still issue a spoiler warning.

As the curtain opens, the audience is introduced to Dorothy Gail, played by Takoda Pedersen, as she runs onto stage to plead to her Uncle Henry, played by Jason I...