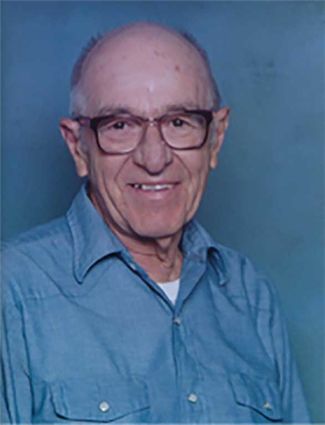 Richard Francis "Dick" Ament, 93 of Scottsbluff, Neb. passed away peacefully Wed., April 24, 2019, while under hospice care at the Western Nebraska Veteran's Home, where he had lived the past four years.

In the last few weeks his health declined rapidly. His body was donated to the Colorado State Anatomical Board in Aurora, Colo.

His services, with the VFW officiating, will be held Sat., June 22, 2019, in Encampment, Wyo. at the Opera House commencing at 11 a.m. Interment will be in Encampment's Washington Park Cemetery at a later date.

Richard was born July 11, 1925 in Marcus, Iowa to William T Ament and Martha (Hughes) Ament. He graduated from high school in Marcus, joined the Navy, and later attended Iowa State and received his Associate Degree in Dairy Science. Richard entered the United States Navy on July 29, 1944 and served during World War II. He was honorably discharged on June 23, 1946. He married Evelyn Wagner in 1947 and was blessed with six children. He remarried and adopted Margaret Holman's four children, and, in 1980, married Freda Hess and welcomed seven stepchildren. Richard was blessed with many grandchildren, great grandchildren and great-great grandchildren. He resided in Iowa, Illinois, Nebraska, Colorado, and Wyoming.

Dick easily made friends wherever he went, especially through veteran organizations. He helped to charter the VFW Post No. 6125 in Encampment and was a member of the Cooties, the Masons, and the Legion. He held several offices including commander, both local and state. He was service-oriented and helped with parades (including being Grand Marshal), the Woodchoppers Jamboree, blood drives, and hospital and VA Home visitations. Dick supported the NRA and taught Hunter Safety classes. He taught over one hundred sixty driver safety classes. He helped locate and transport the WWII artillery piece as a permanent display to the Encampment City Park.