The legendary "Big Boy" steam-powered engine has been stopping in Carbon County on its way from Cheyenne to Ogden, Utah 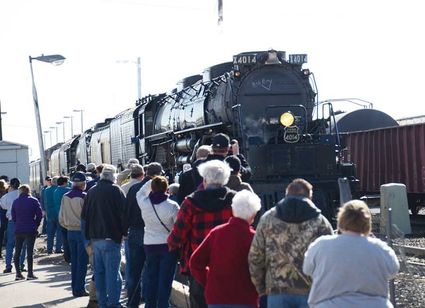 A line of people gather at the Rawlins Depot to look at Big Boy No. 4014 on Sunday morning before it leaves for Rock Springs.

I don't ever remember being specifically interested in trains growing up, though I have always found them intriguing. It was the Transcontinental Railroad that, for better or worse, established the American West as we have come to know it and has continued to be the life-blood for many communities. When I found out that Big Boy No. 4014 was making a trip from Cheyenne to Ogden, Utah. to commemorate the 150th anniversary of the completion of the Transcontinental Railroad, my interest was peaked.

My son, however, was far more than peaked. With Big Boy and Living Legend No. 844 scheduled to stop in Rawlins, I thought it would be great to take him to see a real steam engine. Jareth's interests are as wide as the West and they do happen to include trains on occasion. When I told him that we were going to see that biggest steam engine in the world, he was extremely excited.

So, on May 4, I went up to Rawlins with Jareth, my wife, Telitha, and my mother-in-law, Audrey, to watch as Big Boy No. 4014 came rolling into town. While it was scheduled to arrive at 4:45 p.m., it's safe to say that it didn't actually arrive then. In fact, as we waited at the Rawlins Depot for the arrival of this 132 feet and 1.2 million pound behemoth of a steam engine, more and more people began to arrive and I recognized a few faces from the Valley in the crowd.

Jareth was antsy. With every train that came through he asked if that was the one we were here to see. As the clock ticked and I repeatedly, almost obsessively, checked the tracker for Big Boy No. 4014, I became as antsy as my son. One check of my phone and the train was heading west near Medicine Bow. Another and it was heading west near Como.

As afternoon turned into early evening, Big Boy No. 4014 made its entrance into Rawlins around 7 p.m. only to come to a stop at the train yard. Union Pacific employees informed the crowd gathered, which had become quite large during the wait, that the steam engine would spend the night in the yard and depart from the depot Sunday morning.

The drive home was a long one and, needless to say, Jareth was disappointed. Wanting to witness this historical event and to be a good father, I told Telitha that we would get up at 6 a.m. the very next morning so that we could get up to Rawlins in time to witness the departure of Big Boy No. 4014.

We arrived in Rawlins around 7:30 a.m. on May 5 and waited patiently, again, to see the steam engine as it left for Rock Springs. Jareth was no less antsy than he had been the night before. Finally, around 9 a.m., Big Boy No. 4014 approached the depot. I took the photos I needed, set up my phone to livestream to the Saratoga Sun Facebook page and then put Jareth on my shoulders so that he could get a good view of the train.

It wasn't that much longer of a wait as the sound of the train whistle pierced the air and steam bellowed from under the engine. Slowly, but surely, it began to move again and pick up speed. For a few moments, I was a kid right alongside my son as Big Boy No 4014 raced past us and enveloped us in steam.