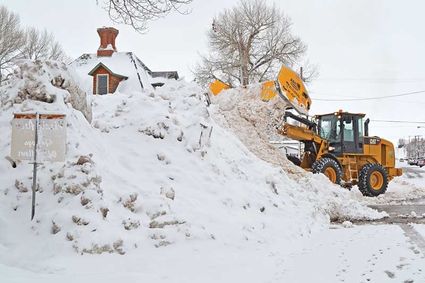 On the afternoon of March 12, it seemed as if spring was just around the corner. The premonition of famed groundhog Punxsutawney Phil, Seer of Seers, Sage of Sages, Prognosticator of Prognosticators and Weather Prophet Extraordinaire (author's note: this is the full name of Punxsutawney Phil) seemed to be coming to fruition. With the official start of spring a week away and temperatures around 40 degrees Fahrenheit, it did not seem as if a storm was on the way.

Of course, what does a marmot know?

The National Weather Service (NWS) office in Cheyenne predicted blizzard like conditions, stating that it was comparable in aerial coverage to the Thanksgiving storm of 1979 and could drop as much as snow as the storm of March 23, 2016, which saw 13 inches dropped in southeast Wyoming. As the storm, named Winter Storm Ulmer, drew ever closer, the amount of snowfall increased, with the NWS predicting as much as 8-12 inches.

On Wednesday night, a bomb dropped.

Bombogenesis occurs when the central pressure of a storm system, like Winter Storm Ulmer, drops 24 millibars, or .7 inches of mercury, within 24 hours-or bombs. Between 8 p.m. Tuesday evening and 9 a.m. Wednesday morning, the central pressure dropped from 994 millibars to 970 millibars. In a matter of 13 hours, Winter Storm Ulmer met the criteria of bombogenesis and turned into a bomb cyclone.

On satellite imagery of the storm, it looked as if a large land-bound hurricane was making its way across the United States. A press release from Governor Mark Gordon even made the comparison, stating "reportedly, it has the same intensity as a Category 1 hurricane."

The Wyoming Department of Transportation (WYDOT) announced the closure of Interstate 80 from Rock Springs to Cheyenne. United States Highway 30 around Medicine Bow followed soon after, as did Wyoming Highway 130 from Walcott to the WYO 130/230 junction. WYO 230 was listed as "no unnecessary travel." WYO 130 and 230 were opened to traffic as of Thursday afternoon and by 7:30 p.m., I-80 and US 30 were both open as well.

Normally, it is the towns that lie along the interstate that get affected the most by road closures during the winter as vehicles stack up and hotel rooms are booked. While not nearly as affected as Rawlins, Saratoga hotels saw some guests either stay because of the storm or stay longer due to the storm.

In most cases, people staying at the hotels were on their way through, but were forced to extend stays because of the storm.

"The decision to close Carbon 2 schools for two days during the blizzard was not done lightly, or without input from multiple officials," said Copeland. "While it is very rare for schools to close in Carbon 2, the safety of our students and staff is our primary concern."

Copeland added that these decisions start with a discussion with the three head bus drivers in the district; Wade Herring for Encampment, Randy Bernatow for Saratoga and Cindy Larson for all northern schools. All three drivers are in communication with the WYDOT and Carbon County officials. Along with communicating with the head bus drivers, the CCSD2 superintendent also speaks with the principals from all the affected schools.

"Last Wednesday morning's forecast had changed from a Winter Storm Warning to a Blizzard Warning overnight," Copeland said. "While we thought we could probably transport our students to school, all expressed concerns that we could not get them back home safely. Therefore, after conferring with multiple individuals and agencies, I made the decision to cancel school for Wednesday. As it turned out, I was very glad that I did since the weather deteriorated throughout the day and all highways closed by the afternoon."

As the storm continued into Wednesday evening, the decision was made to keep schools in the district closed for Thursday as well.

"Our schools were 'buried' with snow and we needed a day to clear the parking areas and sidewalks so access was possible," Copeland said. "Student safety being the primary concern in these decisions, I did not want buses, parents or students stranded trying to get to their schools or back home."

For many Valley residents, this was the first time in recent memory that a "snow day" had been called for a single school, let alone the whole district, and especially two days in a row. On Friday, however, classes resumed after the storm passed.

The effects of the storm didn't stop there. By 10:30 a.m. on Wednesday, Carbon County Library System Executive Director Jacob Mickelsen announced that Saratoga, Encampment/Riverside and Hanna branch libraries would be closed for the day. Rawlins and Little Snake River Valley libraries remained open until noon, when it was announced that all county buildings would close for the day per Board of Carbon County Commissioners Chairman W. John Johnson.

Local businesses were also affected by the storm. The Grumpy Italian Eatery and Firewater Public House in Saratoga and the Bear Trap Cafe and Bar in Riverside would all make the decision to remain closed on Wednesday. Bella's Bistro, while opening its doors Wednesday evening, offered delivery for homebound customers; something that hadn't been done before.

Governor Mark Gordon closed state offices in Cheyenne early Wednesday morning and advised state offices around Wyoming that they could close depending on local weather conditions. According to a press release from the governor's office, Gordon had been watching the progress of the storm with WYDOT, the Wyoming Office of Homeland Security and the Wyoming Highway Patrol.

"We have closed roads and offices to protect the people of Wyoming and those traveling through the state. We have been proactively closing roads ahead of the storm. Additionally, offices throughout the state especially those in the eastern and southern parts of the state are being closed as necessary," said Gordon. "This storm has the potential to be particularly dangerous. My advice is to stay put and shelter in place. Stay home, stay off the roads, and stay safe and warm."

Along with the closure of state offices, the University of Wyoming closed as well and canceled classes around 1 p.m. on Wednesday. The following day, the university remained closed to all but essential staff, which included employees of Wyoming Public Radio (WPR). Social media feeds for WPR showed Morning Edition host Caroline Ballard cross-country skiing through the streets of Laramie to get to the university.

Despite the storm, the Carbon County Impact Joint Powers Board met for their regularly scheduled meeting on Wednesday evening, as did the Encampment Town Council on Thursday evening. 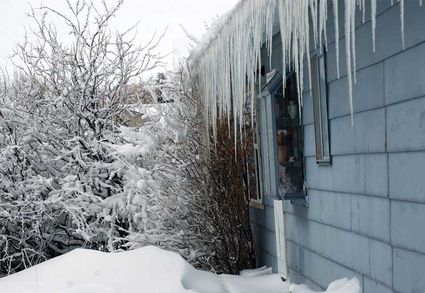 Drifts and icicles were the norm around Hanna after the storm.

Clear skies returned as the storm moved on from Wyoming and Colorado, only to wreak havoc on Nebraska and causing intense flooding, forcing the state to declare a State of Emergency. While towns and cities continued the process of removing snow, Encampment residents reported up to 24 inches and Saratoga residents reported up to 20 inches, things began to return to normal.

Children, still reveling in a snow day, climbed on massive mountains of snow as their parents worked to unbury their houses. Deer and antelope came out from shelter they had taken during the storm and ventured across the plains to forage for food.

Despite the magnitude of the storm, southeastern Wyoming and the Valley made it through relatively unscathed. While not nearly as damaging as the Blizzards of 1949 or 1979, the blizzard of 2019 will likely stay in recent memory for many people.