Fighting to the final second

Encampment Tigers get to Championship round, lose by 3 point buzzer beater in overtime 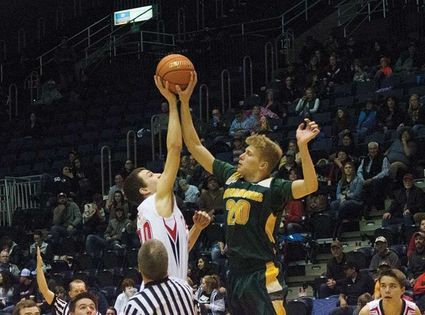 During tipoff, Dalton Peterson, left, has his hands on the ball equally as much as Farson-Eden in a bit of foreshadowing for the game ahead.

A season that started with running clocks for the Encampment Tigers came to an end with an overtime buzzer beater shot on Saturday night in the Casper Events Center. The Tigers, who went through their regular season nearly undefeated, dispatched the Hanna, Elk Mountain and Medicine Bow (HEM) Miners on Thursday afternoon and the No. 1 East Upton Bobcats on Friday evening to face conference rivals the Farson-Eden Pronghorns in the Championship round.

Encampment had already faced the Miners twice during the regular season and were victorious both times, with a score of 69-5...