Despite Panthers football players being overlooked due to 6 man status, Sam Schnieder is nominated to Shrine Bowl 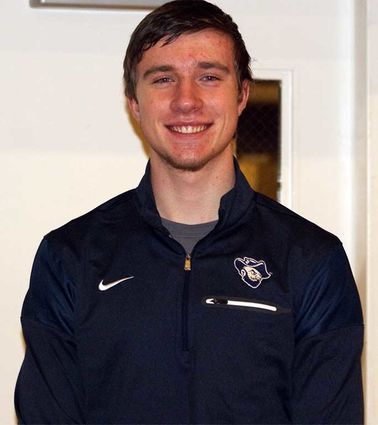 Sam Schnieder is happy to be playing at the Shrine Game for seniors being held in Casper in June.

The beginning of the Panther football season had the team switch from a 1A team to 6 man. There were not enough numbers to field a team larger than 6 man, but, due to the population of Saratoga High School and Encampment High School from which the team drew its players last year, the team is considered 1A. This also meant whatever games played as 6 man would not count. This means no recognition from the conferences or state for the Panther players.

Any player participating on the Panther team was doing it for the love of the game, not fame or recognition, because that was not going to happen.

Senior Sam Schnieder was one such player.

The Panthers had a respectable record at 4-2 .

"We didn't play as many games as we would have liked but most teams already had their schedule full," Head football coach Logan Wright said. "Even so, a 4-2 record could have had us make the playoffs, but it never was an option. This also meant a lot of good players were not getting any postseason awards like all conference and all state, which I feel we had at least three players that deserved it."

Wright did try to get his players recognition although he knew it was probably a futile effort since the state had done this to teams in similar situations in the past.

He sent out e-mails to coaches pointing out the strengths of players he felt were getting overlooked.

It did no good.

No Panther received any postseason award.

"There was no real support," Wright said. "Some were saying, 'It happened to us and, you just have to deal with it."

Wright was not to be deterred.

"I sent a paper to the WHSAA (Wyoming High School Activities Association) submitting Sam to the Shrine bowl, which is for seniors, and it all comes down to a coach's vote," Wright said. "Then I heard from the Lingle coach, who is the assistant coach for the South team, and he said although Saratoga had not played his team, he had heard from other coaches Sam was a player who belonged in the Shrine game."

The annual Wyoming Shrine Bowl has raised more than $450,000 since the game began in 1974 according to its website.

The website explains that, in 1973, two Wyoming High School football coaches, Jerry Overton of Kelly Walsh High School and Denny Brown of Byron High School, started organizing an all star football game with the teams rosters being made up from Wyoming high school players who were graduates of the current year.

Looking for sponsorship for their game, they approached the officers of the two Shrine Temples in Wyoming, Kalif Shrine Center in Sheridan and Korein Shrine Center in Rawlins. The officers of the two Temples agreed to sponsor the annual game and the Shrine Bowl of Wyoming Inc., a non profit corporation, was formed with the first game played in 1974.

The annual game is played the first week of June and has a full week of activities for the participants. During the week, the players make a trip to the Shriners Hospitals for Children in Salt Lake to visit the patients and physically see what the Shrine Organization does. The week's activities are at no cost to the participants and the profits of the game are sent to the Shriners Hospital. The Shrine Bowl has turned into a win/win for all that showcases the senior high school athletes one last time.

Schnieder learned he had made the South team a couple weeks ago from a phone call from the South team's head coach. Schnieder found out a day ahead of Wright.

"It was definitely one of the best feelings, because as a kid you always dream you are going to participate in an event like this," Schnieder said. "For it to actually come true is amazing."

Schnieder is grateful to Wright for constantly trying to have the players from this season recognized.

"I am really grateful to Coach Wright for all the things he has done," Schnieder said. "There were only three players picked from six man teams and I think from 1A, I think there were about ten. It is a big honor to be picked and it happened because Coach Wright wouldn't give up."

Schnieder said although he knew in the beginning of the season it was unlikely he would get any recognition for his efforts, it didn't bother him.

"You don't give up playing the game just because the circumstances seem tough," Schnieder said. "Adversity definitely makes you understand you are playing more for the love of the game and getting to be out there with your brothers. It actually brings more meaning to playing when you don't get the recognition and you play with your teammates that are also there with you for the love of the game."

He said the memories he got from playing this year was worth it even without getting any post season recognition from the state.

"Definitely the win at homecoming against Riverside was something I will remember and the game against Guernsey on the road," Schnieder said. "They were the most fun I ever had playing a football game."

Schnieder will be a receiver for the South team.

Wright is delighted Schnieder is going to the Shrine game.

"He totally deserves it," Wright said.

Schnieder has his sights on the University of Wyoming for his education, although he has been offered football scholarships from some community colleges. He said although it is unlikely he will play college football, it won't stop him from trying out as a walk on for Wyoming University.

He also said although he is honored to be picked, he knows it would not have happened without the help from his team.

"I have to thank all my teammates and coaches because I could never have accomplished what I did without them," Schnieder concluded.

The Shrine game is scheduled for June 8 in Casper.