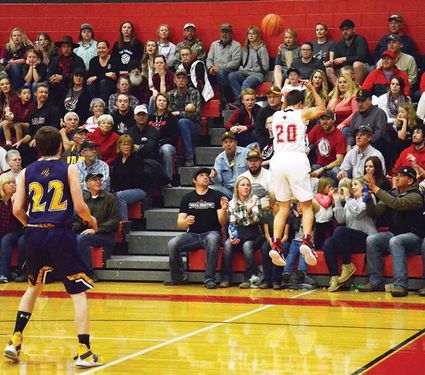 Dalton Peterson goes flying into the stands to try to save a ball-much to the surprise of some fans.

It was standing room only in Tiger Nation on Friday evening as the Encampment Tigers hosted their Valley and conference rivals, the Saratoga Panthers (77-58). Starting out with a 12 point lead in the first quarter, the Tigers kept a double digit lead on Saratoga until the end of the game. Encampment continued their winning weekend as they traveled to Hanna to face-off against the Hanna, Elk Mountain and Medicine Bow (HEM) Miners (69-52). The two victories over the weekend added to the winning streak that the Encampment boys have been seeing since the beginning of the season.