Someone had to lose 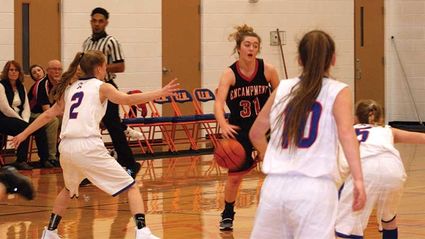 "It was a game where you didn't want to see either team lose," Hanna, Elk Mountain, Medicine Bow (HEM) girls head basketball Jackie Jones said. "Both teams just laid it out there. It was a great basketball game."

The game, played on Saturday at HEM, went into overtime and the Lady Miners came out on top, 46-42.

The Lady Tigers scored first in the game and in the first half got ahead of the Lady Miners by 10 points, but HEM fought on to stay in the game. The Encampment team seemed to be in control, though.

"Our first half, we kind of used it to get back into playing basketball after a long break and we did not execute on offense the way we wanted to," Jones said. "Ball movement was not where it needed to be and against a taller and longer defense like an Encampment team, you have to have ball movement, you have to make them work."

Jones said ball movement was her message to the team at half time. It worked.

"I think the girls came out and did exactly that," Jones said. "There was good ball movement and getting people in the right positions to score."

Jones said in the second half, she felt there was more urgency in the team's press.

"We needed to get them to commit turnovers," Jones said. "We went on a real nice run there when they turned over the ball three or four times in a row. It really helped us get back into the game."

The game was winding down with the Lady Tigers ahead 40-38 when, in the last five seconds, Amy Campbell hit a shot tying the score.

The buzzer went off and it was a new game.

"It was tough to go into overtime without Madison (Campbell), who had fouled out, but Charla Widdison, who joined us late and has been doing a tremendous job in practice, filled in and did a great job," Jones said. "We had to compose ourselves and say 'Lets try to play a game where we could come out on top.'"

She told the team to press and box out on rebounds because of the Lady Tigers advantage with size.

Jones said her smaller players did what was asked, but the team knew it had to get the ball to A. Campbell for scoring opportunities.

Although neither team came out on a scoring jag, A. Campbell scored first for the Lady Miners after two minutes had expired. The Lady Tigers answered with a score of their own but not before A. Campbell got off another basket. The clock was winding down and A. Campbell was fouled. She hit both buckets and the game ended seconds later with the score being 46-42.

"Amy ended with 29 points, 16 rebounds and seven steals," Jones said. "The beautiful thing about this group of girls is they are team, and they know to get the ball to Amy."

Jones said her team is appreciative to beat a team like the Lady Tigers because of the quality players from Encampment.

"It was a great way to come from the break to beat a team as good as Encampment," Jones said. "The girls heart, desire and effort pulled them through. This team doesn't give up, no matter how the score is going."

The next scheduled game is at 5 p.m. on Jan. 8 against Rawlins JV in Rawlins.