Lost and found for Christmas 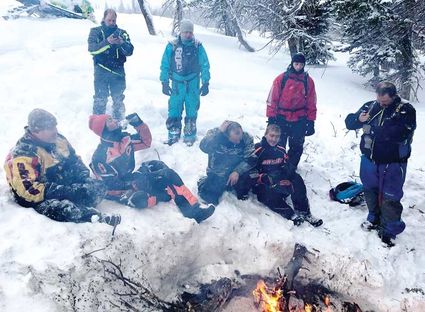 The rescued snowmobilers sit down for a rest following their rescue from Snowy Range as volunteers stand behind them. Front row sitting, from left, Jim Bruining, Zach Christensen, Jeremiah Christensen, and Cole Christensen. Back row, from left, Chad Spellberge, Eric Huepel, Ty Nuhn with Carbon County Search and Rescue, and Greg More.

Christmas, for many people, is spent in a warm house, surrounded by family and sitting next to the tree. For four men from South Dakota, however, their holiday weekend was spent lost in the Snowy Range. According to a press release from the Carbon County Sheriff's Department, Jeremiah Christensen, 43, Zachary Christensen, 22, a 16-year-old, later identified as Cole Christensen, and Jim Bruining, 53, left the Green Rock parking area in Albany County and were last seen in the Quealy Warming Hut area in Carbon County at approximately 1 p.m. on Dec. 22.

The Carbon County Sheriff's Department received a call at 7:39 a.m. on Dec. 24 from the Albany County Sheriff's Department requesting aid in the search. Carbon County Search and Rescue assisted Albany County on Dec. 24 and 25. During those days, a Hilo Helicopter from Cheyenne obtained GPS coordinates of the four lost snowmobilers and successfully dropped a care bag down to the individuals.

On Wednesday, Dec. 26, Carbon County Sheriff's Department and Carbon County Search and Rescue took command and, at 11:45 a.m., the individuals were located and were reached by search and rescue at 1 p.m. With snowshoes provided, the four snowmobilers hiked out of the area with the search and rescue teams. At approximately 6 p.m., the rescued individuals were reunited with their family at the Green Rock parking area.

As the events played out over the holiday weekend, the Snowy Range Snowmobile Club Facebook page, managed by Laramie resident Heather Rottman Tupper, provided updates on the search.

The Saratoga Sun reached out to the organization in Red Lodge, but as of press time the organization had not received any additional information. Similar efforts to reach out to Rottman confirmed that the funds were in the process of being relocated to the proper recipients.

A similar fundraiser started by the Snowy Range Snowmobile Club for the Albany County Sheriff's Search and Rescue raised $3,970.

It was also announced on the Saratoga Skijoring Facebook page, on Thursday, that the Saratoga Skijoring would be working in cooperation with Saratoga Hot Springs Resort to raise money for Carbon County Search and Rescue through a silent auction at 6:30 p.m. on Feb. 9 prior to the Chancey Williams the Younger Brothers Concert.