Attendees begin to get settled in for their Thanksgiving meals Thursday.

Chris Shannon was bathing and seasoning the eight turkeys, this year donated by the Hotel Wolf, to be cooked for the 23rd annual free Thanksgiving dinner held at St. Ann's Parish Hall in Saratoga that next day.

At around 11 a.m., the food was in the process of being carried across the street to St. Ann's for final preparation and distribution.

Turkeys were carved as the many volunteers grabbed up large pans of food and styrofoam containers to begin putting together the 51 meals delivered that day.

Those meals were then boxed up and delivered by volunteers to those requesting home delivered meals.

The line for food initially ran all along one side of the parish hall, but those in line seemed to be in the holiday spirit as they visited and shared laughs. 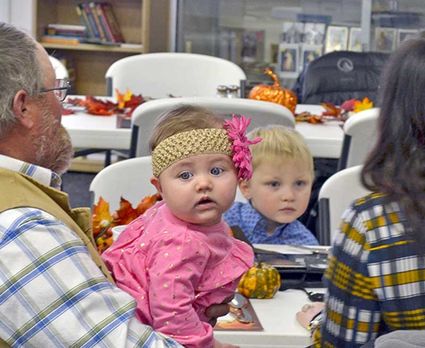 Hadley Wiant takes in the large line of attendees.

The volunteers shared the mood, too, smiling and chatting amiably as they efficiently got everyone's plates filled.

Eventually seating in the hall was filled as those who came shared a meal and camaraderie.

By around 1:30 p.m. the line began to lessen and the volunteers got some food for themselves and began the clean up.

Over the course of the day, 51 meals were delivered to those unable to attend and 136 meals were given out at the parish hall.

Because tickets are not taken or lists are not made for the free meal, Verplancke determines the amount of meals served by the amount of plates put out over the course of the event. She also keeps count of home delivered meals during the event.

All in all it seems the PVHH handily accomplished the task of spreading some holiday cheer for the 23rd year in a row.