Variances, RVs and a Memorandum 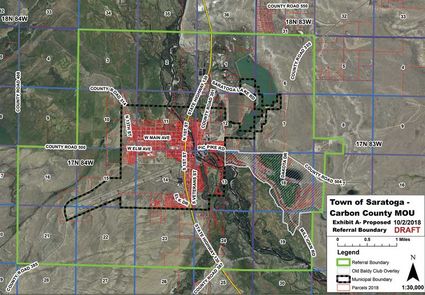 A map showing the referral boundary in which the town and county will cooperate on planning and zoning.

The Saratoga Planning Commission met at 5:30 p.m. Wednesday and prefaced their meeting with two public hearings for setback variances.

The first hearing was opened for a 20 foot setback for a garage on 908 Rochester. Though the normal setback is 50 feet, the forms were in order and no discussion was made in moving Bob Keel's request to the commission.

The second hearing was on a 1303 Club Court property owned by Kerry Russell. This variance asked for a six inch setback on a corner lot. The normal setback is 15 feet for a corner lot and discussion was made over sight lines at that intersection. Herb Porter, who said his interest in buying the property was contingent on being able to build a 2-car garage on the property, brought in several photos and diagrams showing the intended new structure.

No objections were made during the hearing and the request was forwarded to the planning commission.

After approving minutes and dispensing with correspondence and items from the public, of which there was none, the commission got to the variance requests.

There was little to no discussion over Keel's variance request and it was approved quickly.

More discussion was made on the Russell variance request with Nelson asking about how the new garage would affect being able to see traffic at the intersection. It was finally determined that the new structure was not out of line in that area of town and since there were only three residents living on the dead end street it would not pose a significant risk. That being the case, the application was approved with Faust making the motion and Westring and Duke seconding.

The commission then proceeded with old business.

Nelson asked to table the grading and excavation permit discussion. That being agreed on, the commission moved to the Recreational Vehicle Parks ordinance.

Nelson explained what changes and updates had been made to chapter 18.58 and while there was some talk about toilet facility requirements, it was decided that a recreational park operator could file a variance if a different solution could be arrived at. With that, the commission decided to forward the amended ordinance to the Saratoga Town Council for the required readings.

The Zone of Influence and Memorandum of Understanding (MOU) with the county was the next item on the agenda and Carbon County Planning and Zoning officer Sid Fox was on hand to give his opinion on the document.

During the discussion it was stated that the agreement just codifies what currently occurs with the county, in that the town will handle building permits and the county will continue to handle zoning and development related permits.

What has been made specific in the MOU is how referrals will work. When the town gets a request for a building permit (within Saratoga's Zone of Influence), Dan Ferrin, Saratoga's Planning and Zoning Officer, will refer to the county and provide authorizations from land owners, site plan and signature of approval from the Old Baldy Corporation (OBC), authorization for water cap from the OBC and a DEQ permit to construct if they are going to do septic on site or authorization back to the town for a wastewater treatment system. Some of those things would go to Rawlins if the town is handling a building permit. If the county is handling anything that would require a public notice on a project within the zone of influence, that would be referred to the town for comment.

Nelson said, in the future, there would be an opportunity to improve on the agreement but for now the agreement codified what is currently happening and also lays out some ground rules for coordinating and communicating between the town and county.

Fox then added that the county commissioners had not yet seen this as a board, but said they are aware of what is going on. Fox said there would be a meeting on Dec. 3 in which he would bring up the agreement.

These things being stated, the planning commission decided to move the MOU to the Saratoga Town Council for approval.

With Dan Ferrin being unavailable, the commission discussed a question that had come up. Ferrin had, in outside discussions, been asked about the possibility of Blakeman Propane taking over the Build Rite property just north of town. Nelson said after looking in the highway business chapter (of the Saratoga town code) that, "sales of commodities and other commercial activities were specifically allowable in the highway business zone," and added that "I didn't see anything in the entire chapter that made me think that a propane sales or propane transfer station wouldn't, from a zoning standpoint, be allowable there."

Nelson said that he had discussed with Ferrin adding fire protection to the property along with sewer easements, but said some of these things might be joint powers board issues.

Fox added that, were the facility to be past a certain size, the state would step in with their own regulations.

With that the meeting was adjourned.

The next meeting of the Saratoga Planning commission will be 5:30 p.m. Tuesday, Dec. 11 at the Saratoga Town Hall.